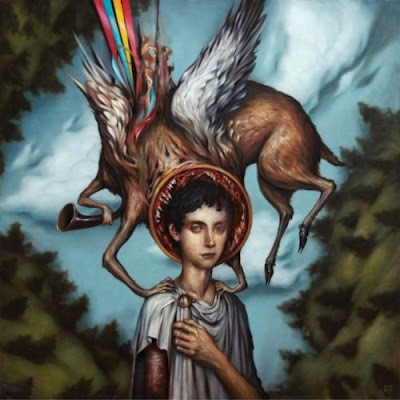 Doylestown, Pennsylvania’s Circa Survive have made the jump to a major label, but still bring a strong DIY effort to their third album, Blue Sky Noise. Working with producer David Bottrill (King Crimson, Tool, Muse), Circa Survive have crafted their most commercial album to date. Armed with a new perspective (particularly vocalist Anthony Green, who took some time out after a mental breakdown to get back to himself and gain new perspective on the world, Circa Survive look to make 2010 their best year to date.

Blue Sky Noise opens with “Strange Terrain”; a driven tune that is an average opening tune but features an outstanding vocal from Green. “Get Out” is, plainly said, a self-referential temper tantrum in song; encompassing an “I’m So Misunderstood” mind with insular thoughts. The song is powerful, angry and whiny all at once; and will sound very familiar to parents of a teenager or anyone who actually remembers what it was like to be a teenager. “Glass Arrows” is a pro-forma big rock tune, infusing just the right amount of anger to sound legit but not enough to be over-the-top.

“I Felt Free” is a bland and pretentious power ballad that doesn’t do much to stand out from the crowded power ballad field. Likewise, “Imaginary Enemy” has a cookie-cutter alt-rock feel. It’s a dysfunctional relationship song where the dysfunction of one member of a relationship is topped only by the partner who bends themselves every which way to satisfy that dysfunction. “Through The Desert Alone” is a step in the right direction, taking more of an art-rock approach by paying attention to musical details rather than a strict commercial sound. The rest of the album is a series of hits (“Fever Dreams”, “The Longest Mile”, and “Compendium”) and misses (“Frozen Creek”, Spirit Of The Stairwell”, “Dyed In The Wool”).

After strong Indie efforts Juturna and On Letting Go, it seemed likely that making the jump to the majors would not be likely to affect Circa Survive’s songwriting. But something has happened along the way. The songwriting on Blue Sky Noise is very uneven, and there seems to be a distinct struggle here between commercialism and art. More often than not commercialism seems to win on Blue Sky Noise, but its impact has been greatly diluted by the struggle, leaving Circa Survive with a less than optimal album that is not truly representative of their talent or work ethic. The reasons for this are unclear, but hopefully Circa Survive will get these kinks worked out before the next album.

Rating: 2 Stars (Out of 5)
Learn more about Circa Survive at http://www.circasurvive.com/ or www.myspace.com/circasurvive. Blue Sky Noise is available as a CD, LP or Download through Amazon.com. Special bundles are also available through the band's web site for hard core fans.
Posted by Wildy at 5:59 AM

Labels: Circa Survive, Coheed and Cambria

Get off your high horse, this album is amazing. What I love about Circa is how different and amazing every album is. Why not be a little more radio friendly? Everyone should hear Circa Survive they are an incredible talent, being the underground sensation lost it's appeal when music became FREE everywhere online.

I agree with mike. This band is so amazing, and every album they've put out is of great substance. You're a terrible critic with one line descriptions for songs that have so much depth.

Cookie cutter and Circa Survive should never be used in the same sentence, much less used as an adjective to describe the band.

Your musical ignorance has overwritten your integrity as a viable source of information and review.