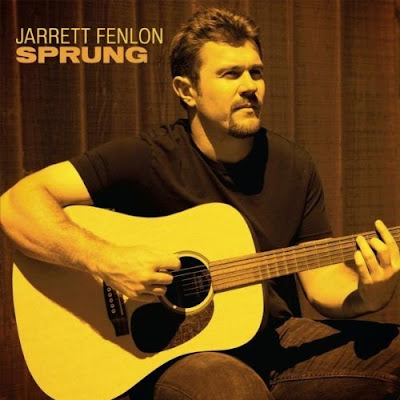 San Francisco's Jarrett Fenlon is a performer with two distinct personalities. On one hand is the cultured bluesman, singing with a mostly lyric voice and pop mentality that puts a nice sheen on songs about hard knocks. On the other hand is the passionate balladeer that is primarily influenced by folks such as Van Morrison or Rod Stewart. This duality has been on display in San Francisco for some time now, as well as up and down the West Coast in small venues as Fenlon has worked on paying his musical dues. Fenlon brings both personas to his sophomore album, Sprung,

Fenlon has a great voice for the blues-based material, a lyric tenor with a gruff edge and a world-wary approach that's perfect for the working man's art that is the blues. On the ballads Fenlon can be hit or miss, occasionally struggling for pitch and tone. Both voices make ample appearances on Sprung, which opens with the Breezy folk/pop of "Autumn". This is a great bit of songwriting and a perfect way to kick off the album. "Love Slave" is an entertaining blues-based tune about how powerless love can make you feel. Fenlon is convincing as a blues vocalist in spite of the smooth sound he showed on "Autumn". "Boots" become an object of affection on this fun number with exquisite instrumentation. Musically this is the best offering on the album.

Fenlon digs into his first bossa nova on the title track, a study in fear of commitment from the male perspective. On "Love A Little Bit" you'll hear the first hints of pitch and tone issues as Fenlon sounds quite uncertain in an awkward folk ballad with horns. Things are a bit better on "From The First Moment", but difficulties persist. The arrangement is a pleasant one, but the song and performance pale in comparison to the more blues-based material. "Mean Ol' Woman" is the well-written story of an uptown girl who falls in love with a downtown boy. The song uses humor both descriptively and as a weapon and will be a must in concert. Fenlon closes with the cliché ballad "True Love". The arrangement is decent enough, but the song just doesn't have any spark and Fenlon's vocal issues make this a tough choice.

Jarrett Fenlon is of two minds as a performer: the Bluesy side works very well; the lyric side is much less consistent. Sprung is a solid effort that leaves ample room to grow. Some of the material on Sprung absolutely soars, and at other times it seems to be grounded. Over time, Fenlon will pick through these steps and find a path that suits him well. Right now it sounds as if he's still working it out.

Learn more about Jarrett Fenlon at http://www.jarrettfenlonmusic.com/ or www.myspace.com/jarrettfenlon. You can purchase Sprung on CD from CDBaby.com. If digital is more your speed, pick it up from Amazon.com.
Posted by Wildy at 6:15 AM