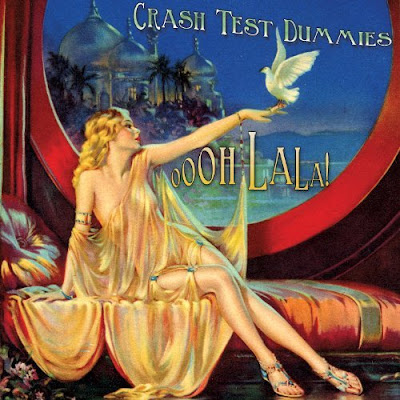 It’s 1989 in a Country and Western bar in Manitoba. It’s here that the seeds of Crash Test Dummies were born. Brad Roberts, Ellen Reid, Benjamin Darvil, Dan Roberts and Mitch Dorge came together to form one of the most successful Canadian bands of the 1990’s. The musicianship of the band was always top notch, but it’s the distinctive voice of Brad Roberts that has been the calling card of Crash Test Dummies over the years. Darvil, Dorge and Roberts have all moved in and out of the regular lineup in recent years, but Roberts’ distinctive voice and songwriting style continues to drive the band. On May 11, 2010, Crash Test Dummies return with their first album of new material since 2004. Ooh La La! marks a major departure for Crash Test Dummies, with Brad Roberts actually writing an album that sounds happy.

Ooh La La! opens with “Songbird”, a highly orchestrated game of word or phrase association. The arrangement here is gorgeous, and Roberts delivers it in that unforgettable voice of his. “You Said You’d Meet Me (In California)” is and mooning and oddly psychedelic song that’s essentially happy in tone. The instrumentation here is mildly discordant, reflecting perhaps a discomfort with the happiness that pervades the album or trouble beneath the surface. “And It’s Beautiful” extrapolates from love the beauty of the world and of the people in Roberts’ circle; a happy daydream with a melody that will stick around your head and set up camp. On “Paralyzed”, Roberts gets retrospective, covering the utter loss of self that can follow the end of a relationship. It’s a particularly poignant tune; with more brain and heart you’re likely to find in your average pop/rock tune.

One of the highlights of the album is “Not Today Baby”, a wonderful tune written from the perspective of the eternal bachelor. While the reality of love has softened the edges a bit, the essential craftiness and sexuality that has run through Roberts’ recent work is present in this delicious arrangement. In “Heart Of Stone”, the same eternal bachelor finally gets bitten by love. The song explores the dichotomy of wanting love and wishing he could block it out. Even as he utters the wish he knows it will never happen. “Heart Of Stone” jumps forward to offer the perspective of time and happiness, but that desire to wander never leaves even if he’ll never act on it. “What I’m Famous For” continues the Crash Test Dummies’ tradition of songs about individuals with a real dark side; squatter’s rights and an ill-defined threat spark this humorous alt-country-noir tune. Crash Test Dummies go big band on “Now You See Her”; a quirky little tune about an uncatchable girl. This is the most surprising entry on Ooh La La!, and perhaps one of the best. “Now You See Her” is wonderfully quirky, with a playful feel that is entirely charming. Ooh La La! bows with “Put A Face”, the lone lead vocal for the exquisite Ellen Reid. It’s an artist’s rumination on capturing moments, please or places in song. While this song is specific to music, it could apply to most any artist/media.

Over the years Crash Test Dummies have been prone to experimentation. Sometimes it’s gone well (Songs Of The Unforgiven); others have not been so well received (Give Yourself A Hand). This time out, Roberts and producer Stewart Lerman (Antony And The Johnsons, The Roches) played around with the Optigan (the 1970’s version of a digital sampler) in the process of writing the album. Brad Roberts as a happy and (essentially) well-adjusted person is going to surprise a lot of long-time Crash Test Dummies fans. Roberts hasn’t entirely lost his dark side, but Ooh La La! might be the brightest overall tone to a Crash Test Dummies record since The Ghosts That Haunt Me (1991). From a pure songwriting perspective, Ooh La La! doesn’t have the edge of prior material, but its solid-to-plus throughout with a couple of moments of brilliance thrown in along the way. Two songs could perhaps have been left on the floor, but Ooh La La! is a nice step back into the limelight for Crash Test Dummies.

Rating: 3.5 Stars (Out of 5)
Learn more about Crash Test Dummies at http://www.crashtestdummies.com/. Ooh La La! drops on May 11, 2010. You can pre-order the CD from Amazon.com. Expect digital availability through all major outlets.
Posted by Wildy at 7:11 AM

Sorry, but "And It's Beautiful" sounds almost identical to "Chocolate Rain." In other words, not good.