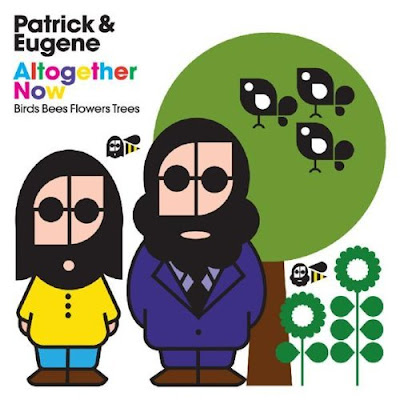 Patrick Dawes (Groove Armada, Richie Havens) & Eugene Bezodis (near-tragic magic) are a British phenomenon that has danced along the periphery of American pop-cultural conscience for a few years now. Perhaps best known for the song “The Birds & The Bees”, which accompanied a well-known Volkswagen commercial a couple of years back, Patrick & Eugene have repeatedly found their music used in commercials and even in television shows (Weeds, Grey’s Anatomy). Patrick & Eugene owe nods to bands such as They Might Be Giants, The Beautiful South and Squirrel Nut Zippers, but also have comedic routes that stretch from Monty Python to Derek & Clive. Altogether Now: Birds Bees Flowers Trees is Patrick & Eugene’s US debut. It is a compilation of the best material from Patrick & Eugene’s two British albums, Postcard From Summerisle and Everything And Everyone. Some might quickly categorize Patrick & Eugene as a novelty act because of the oft comedic wit and atypical instrumentation/sounds, but the musicianship here is too good for Patrick & Eugene ever to be considered merely a novelty act.

Altogether Now opens with Patrick & Eugene’s best known song, “The Birds And The Bees”. The song has an old-timey feel with a modern array of electronic accoutrements. The sound is eccentric and eclectic, and melody is so catchy you’ll be knocking your head against the wall trying to make it come out weeks later. “Nevertheless” is a fun sway-inducing tune. The song will make you yearn for simpler times, relying on a spacious arrangement to give it an open, easy feel. “Circus Train” is a sound collage, creating train and animal sounds from percussion, found and synthesized sounds, instruments and creatively applied vocalizations. The song is highly rhythmic and fun, and displays keenly Patrick & Eugene’s talent for constructing a coherent song out of almost anything.

“Altogether Now” is a happy, highly positive tune. You’ll want to be up and dancing around to this highly active musical missive; it feels sort of like a children’s song for adults. Patrick & Eugene wend their way through the eccentricities of songs such as “Llama”, “Old Times” and “Don’t Stop” before settling on “The Leprechaun”, an eclectic and mildly catchy tune that listeners will find highly appealing. “A Dog’s Tale is likely to be a fan favorite, but the album’s theme song should be “Can’t Get You Out Of My Head”. That’s what you’ll be thinking about Patrick & Eugene in the days and weeks after your first listen to Altogether Now. Patrick & Eugene might have saved their best work for the last two tracks on the album, however. “Saturday Night” is a wonderful reflection on days gone by with a riotous twist; you’ll dance until your laughter prevents it. Patrick & Eugene take one more shot to show off their instrumental chops on “Peony”, an intriguing little number that’s a great calling card for the duo.

Altogether Now: Birds Bees Flowers And Trees might be one of the best original offerings of the year thus far. The music will be both new and familiar to American audiences, and with the right continued exposure should mean significant success for Patrick & Eugene. It’s unusual to find an act that can make you laugh and want to dance all while providing high-quality songwriting and musicianship. Patrick & Eugene harkens back to the days of Vaudeville, while maintaining seriously modern elements to the music they create. Spend some time getting to know Patrick & Eugene. You’ll be happy you did.

Learn more about Patrick & Eugene at http://www.patrickandeugene.net/ or www.myspace.com/patrickandeugene. Altogether Now: Birds Bees Flowers Trees is available from Amazon.com as either a CD or Download.
Posted by Wildy at 6:51 AM

Labels: Derek And Clive, Monty Python, Patrick And Eugene, Squirrel Nut Zippers, The Beautiful South, They Might Be Giants