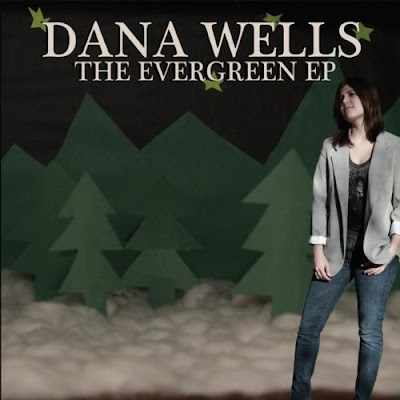 Growing up in a Washington, D.C. area household where top-notch musicians regularly come to record in your basement has to have an effect on someone. For Dana Wells, it served as a breeding ground for a subtle mind and a voice that are both mature far beyond her nineteen years. The Berklee College Of Music student is the daughter of prominent Beltway band leader Wayne Kilentz and was composing her own songs by the age of three. As the bass player, songwriter and lead vocalist for Lemonface, Wells transcended the usual high school band experience, becoming a top draw in the Baltimore/DC corridor as well as playing clubs in New York City and Los Angeles. As wells transitioned from high school to college, she also transitioned into the role of solo artist. The first official document is now available, as Wells has released her solo debut, The Evergreen EP.

Wells opens with "Anyone But You", a love song that avoids convention and sap to explore potential. Wells makes great use of imagery here and throughout the EP, wrapped in a simple arrangement and strong melody. Dana Wells has a voice that's clear and sweet with just a hint of amber; shaded but not dark or desolate. "We Come Undone" is a forthright and insightful look into the human condition and the chaos we seem to breed. Wells shows herself to be a serious songwriter with a gentle delivery that's eminently pleasing to the ear. "Evergreen" is a song about faith; not so much religious faith per se, but a faith in things working out for the best. Wells sings with her heart; showing an ability to commit to a song fully and in the moment without over-performing

"Leave Me", which Wells co-wrote with guitarist Mark Williams deals with the aftermath of a relationship. The song takes a pragmatic approach to looking back, yet betrays a deeply emotional vein beneath the surface. On "The Benefit" Wells acquires a country/Americana flavor that suits her well. The song is highly poetic and well-written; a wow-moment that illuminates the aftermath of a relationship in highly personal terms. All of this is build-up to "Watching Winter Melt Away", a virtuosic songwriting endeavor that uses both seasons and geography to illuminate the cycles of love and loss. Wells uses the song to uncover a realization that a relationship is simply not meant to be. "Watching Winter Melt Away" is the sort of song that other artists hear over time and cover because the song is so compelling and well written it needs to be heard. The Evergreen EP winds down with "Into Air", rumination on loss that's full of melancholy and regret. "Into Air" is poignant, skipping self-pity for an attempt to better understand how something good fell apart.

It's hard to know where to start. If you saw Dana Wells busking on a corner somewhere you'd keep throwing money in her case all day so she wouldn't stop. Add to this a songwriting talent that quickly paces the bulk of her contemporaries and shows the potential to someday be discussed in awed tones and it's hard to imagine Dana Wells doing anything other than making music for a living. Wells doesn't aim for such lofty goals as being a rock star, but she does want to be a working musician. Music fans everywhere benefit from that decision (or they will over time). This is talent that's meant to shine, and Dana Wells has made an excellent start of it on The Evergreen EP.

Learn more about Dana Wells at http://www.danawellsmusic.com/ or www.myspace.com/danawellsmusic. The Evergreen EP is available as either a CD or Download from CDBaby.com.
Posted by Wildy at 6:26 AM