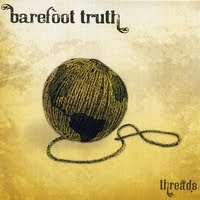 Mystic, Connecticut quintet Barefoot Truth are examples of the power of new media to make or break a band. In an era where the myopia of major radio has grown to epic proportions, services like Pandora have unprecedented power to help a band explore their fan base. That happened last year for Barefoot Truth, when Pandora Radio picked up their song “Roll If Ya Fall” and put it in rotation alongside artists such as Jack Johnson and Dave Matthews Band. Almost overnight Barefoot Truth went from a local band to a band in demand all along the east coast of the US. Looking to build on that momentum, Barefoot Truth returns with Threads in 2010.

Threads opens with “OK”, a delicious pop arrangement full of great hooks that is absolutely radio ready. Lead vocalist Will Evans sounds more than a little like Rob Thomas here, although that sound doesn’t necessarily hold throughout the album. “All Good Reasons” is highly enjoyable, a light and airy arrangement, mostly acoustic, blending elements of Americana and Pop. “From The Earth” is a call to arms for all of mankind to band together on the basis of the one thing we all share; coming forth from the Earth. The song casts aside ideology and demands that fate not be accepted. The arrangement is wonderfully executed, but the message perhaps doesn’t carry the power intended. Barefooth Truth sticks with the heavy environmental message on “Damage Done”, taking to task the power brokers and captains of industry for the deluge to come. The song is well-written, but lacks the veracity it might have had even six months ago before the climate-gate scandal.

“Roots Of Stone” finds Evans using a rapid-fire lyrical style ala Jason Mraz. The song is a bit on the dark and heavy side and sonically is the class of the album. “Curtain Call” is the sleeper single on Threads; danceable and dynamic pop full of funk that you’ll find yourself listening to again and again. Barefoot Truth raises their musicianship a notch for “Without A Fight”, a sort of pragmatic tune about not giving up on yourself. The piano work in this tune is worth checking out. Threads closes out with “Day I Die”, offering up an intriguing bit of fatalism in light of the call to cast fatalism aside in “From The Earth”. The musicianship and composition here are superior. Barefooth Truth show how young and fluid their perspectives are on “Day I Die”, but also firmly establish their ability to write an “It” song. This can only lead to good things down the road.

Barefoot Truth have something special cooking up in Mystic. Perhaps it’s the salty air or the pizza. Whatever it is, Barefoot Truth have broken through the regional cap and gained national recognition. Barefoot Truth shows the ability to craft and deliver songs with wide appeal without kowtowing to the bastardized pop that haunts commercial radio. The band doesn’t succeed with every song on Threads, but the band gives a solid effort on every song, raising their game at times on the album and showing flashes of what they might become. Threads is a great follow-up.

You can learn more about Barefoot Truth at http://www.barefoottruth.com/ or www.myspace.com/barefoottruth. You can purchase Threads as either a CD or Download from CDBaby.com.
Posted by Wildy at 6:39 AM