Review: Morre - Out There 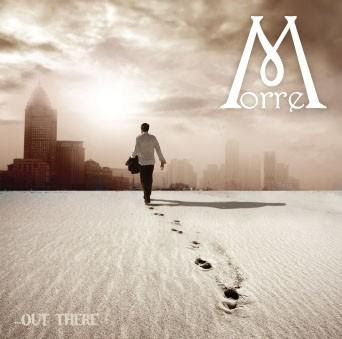 Morre - Out There
2010, Morre
Toronto rock quartet Morre bring back the glam of the 1970’s and 1980’s in a stripped down and compact sound that’s perfect for today. The band has garnered significant attention in the Metro Toronto scene since their inception in 2008, earning comparisons to such wide-ranging bands as Gogol Bordello and Pink Floyd. What’s very clear from the opening notes of Morre’s debut album, Out There, is that the band knows how to perform, and is so confident in their ability to do so that they don’t need to hide behind distortion or effects. While musically superior, Morre does lapse into lyrical obsequies often throughout Out There, making their intent difficult to follow at times.

Out There opens with “The Moment”, a radio-friendly melodic hard-rock tune with wonderfully dark vocal harmonies. This song will get a lot of attention from radio on its uniqueness of sound alone. “Brand New Tide” is a mostly-acoustic rocker with a vibrant sound and distinctive harmonies. It’s a song of questing for what the world has to offer full of the vigor and bright-eyed hope of youth. Morre offers up some tremendously danceable rock ‘n roll on “Playing With Fire”. The lyrics are a bit awkward but the song more than makes up for any such considerations. “In My Vein” is sonically interesting but highly obtuse on the lyrics side, while “Under The Lights” plays like a self-serving pity-party over the trials involved in a life of playing music and being on stage. “Under The Lights” is sonically strong with real progressive rock tendencies in the instrumentation that make it a fun listen. On “Time Is Slipping Away”, Morre shows what can happen to a great chorus when there isn’t anything strong to marry it to. The chorus offers promise, but is repeated excessively and there’s little else here seriously worth investing in. Morre closes out with Times Are Changing, a high energy concept that never fully realizes itself, but the arrangement is exquisite.
Out There offers an interesting snapshot of Morre, a hold-over from the days when rock n roll was full of glam and irresponsible behavior. Morre has stripped their sound down a bit from bands like Guns N Roses, Poison or Ratt, and has incorporated some of the quirky party energy of Kim Mitchell’s mid-solo career work. There are a couple of blips on Out There, and the lyrical content doesn’t always measure up the quality of the music, but on balance, Out There is a solid introduction to a band with a bright future.

Rating: 3 Stars (Out of 5)
You can learn more about Morre at www.myspace.com/morremusic. Out There can be purchased as either a CD Or Download from CDBaby.com.