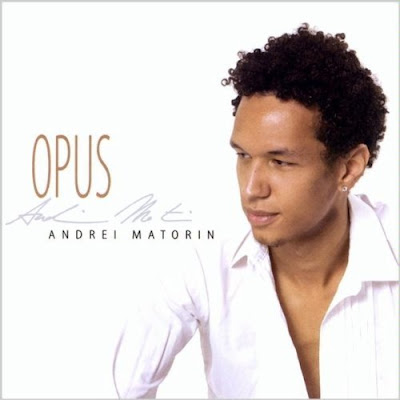 Andrei Matorin appears to have been born (or at least raised) to be a jazz musician. Studying in such vaunted institutions as the Boston Center for the Arts, the Conservatoire de Geneve and the Berklee College Of Music, its likely Matorin has never experienced the starving artist phenomenon first hand, but his passion for jazz shines through every note and run on his debut album, Opus. The Brazilian-born Matorin was exposed to jazz at a young age by bassist and friend Josef Deas, who introduced Matorin to John Coltrane, Miles Davis, Oscar Peterson, Herbie Hancock and Ray Brown, among others. Matorin has never slowed down since, completing a dual program at Berklee in jazz composition and jazz performance as well as continuing to study and perfect his classical technique.

Opus opens with “Smile”, a friendly discussion between violin, piano, bass and percussion that grows into a near duet between the violin and piano; similar to two Broadway divas taking over the stage from lesser players in a finale. Offered in a wide-open arrangement with tremendous highs and lows; these peaks and valleys are measured more in intensity than volume. “Smile” is highly lyric in both the violin and piano, with Dan Pugach’s polyrhythmic drum part punctuating their conversation like a color commentator while Luques Curtis glues together with a vital-yet-unassuming bass line. “Then And Now” finds Matorin’s violin taking on a slightly darker tone. Melodically reminiscent of some of Sting’s more esoteric forays into Jazz (or at least his band’s), there is a great deal of conflict and loss woven between the lines of the song; a current than runs deep beneath the surface but touches every note even if you never quite see it.

“Coming Home” is full of reverie; joyous moments are recalled in a musical line where echoes of times past weep from Matorin’s bow like a melancholy catharsis. Brighter thoughts ensue and interweave as the listener is turned to and fro by the juxtaposition of past and present in the song. Matorin and his band introduce a slinky, sneaky feel on “Silver Blue”, sounding like a score element from an old mystery film. This is great music for skulking by a pulp-fiction private eye; not dark or ominous but almost with a comic air at times. “Trancoso” is a vibrant dance with Matorin’s violin as the main voice, but Takeshi Ohbayashi steals the show in a supporting role on piano. Chaotic subtexts feed into a classic parlor jazz feel throughout the song. Matorin underscores the chaos in the final moments of "Trancoso" before ascending to sublime ending that marks release.

“One Last Song” is a wonderful change of pace; a daydream in song that inspires images of summer days with lots of sunlight and high fluffy clouds where you can simply drift and let your mind wander where it will. Matorin is the prime mover here, waxing and waning like the breeze, but always present. The only offering on Opus that seems out of place is “Hymn No. 1”. Little about the song would suggest the contemplative or reverent nature of a hymn, and the composition fails any sort of coherency test. The focus here is on numbers: speed and how many notes Matorin can fit into a measure or line. Compared to everything else on Opus, “Hymn No. 1” sounds messy and incoherent. Matorin rights the ship however with the moody violin/bass duet “Sunday Blues”. “Sunday Blues” sounds like pure creation; it wouldn’t be at all surprising to learn that this recording was a one-off live improve between Matorin and Curtis. Curtis’ bass solo in the middle is pure chaos; something of a “huh?” moment but resolves back into the structure of the duet to close out.

Andrei Matorin is well-schooled in the art of Jazz, and his schooling shows throughout Opus, but there’s a quality that shines through here that simply cannot be taught. Matorin has a love of the music he plays that’s unparalleled, and displays flashes of genius born of love and intensity with the violin in his hand. Opus is highly creative, sticking primarily to a classic sense of jazz improvisation, digressing only when Matorin deems appropriate. Opus is an album that fans of modern jazz will be happy with, and even the stodgiest of jazz purists will gladly offer a space in their collection to.

Learn more about Andrei Matorin at http://www.andreimatorin.com/ or www.myspace.com/amatorin. You can purchase Opus as a CD or Download from Amazon.com.
Posted by Wildy at 5:41 AM