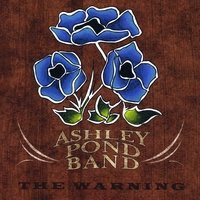 Malone, New York (pop. 5,793) is a small town in the Adirondack Mountains that's a great destination for hikers, but not necessarily known as a hotbed of musical creation. Enter Ashley Pond, a native of Malone who moved to Albany, NY as a first step in pursuing a career in music. In 2007 she released a solo album entitled Dala, which was declared one of the top 10 Local Albums of the year by Metroland Magazine, whose readers also declared Pond the "Best New Solo Artist" in the 2007 "Best Of" edition. Joined by bassist Sarah Clark and drummer Scott Smith for live shows, the trio quickly grew into The Ashley Pond Band and began working on new material that Pond was constantly producing. The band saved up the money made from gigs to finance their latest album, The Warning, released in June of 2009. With the late addition of guitarist Eric Halder, it's clear that both Ashley Pond and the band are continuing to grow into their musical destinies.

The Warning opens with No More West To Be Won, a sultry blues tune with an understated arrangement. Pond takes full advantage with a voice full nearly to bursting with emotion and texture. Its Norah Jones meets Michelle Malone. Up next is The Warning; Texas Blues ala ZZ Top that's not over the top but full of powerful undercurrents. The sound here is very distinctive, as Pond is a bit atypical in approach both in vocals and on guitar, but the overall effect is quite good early in the disc. Wolf Man is music noir with vaguely twisted sensuality. Readers familiar with Sarah Slean have an idea of what they'll hear here.

As happens with young bands sometimes, The Warning hits a point about four songs in where the really original stuff has been done, and the band settles in to a series of decent but relatively non-descript tunes. Songs like There You Are, Breaking Day, Current Race and Meet Me are good, but just not quite up to the level of the first three. Born On A Full Moon and A Blue House fall into the trap of plodding songs that take too long to get where they're going to maintain listener interest, but each show signs of life in the melody or instrumentation. Ashley Pond Band comes back to life a bit at the end with the gut-wrenching melancholy of The Dirt. It's a bit off the beaten track but a great listen. The Warning closes out with The River; I'll leave it to readers to check out but it may be the best writing on the disc.

Ashley Pond Band gives an uneven but promising performance on The Warning. The high points are noteworthy and ultimately listenable, making the more "average" material seem a bit lackluster by comparison. Pond is a prodigious writer and may be a victim of quality over quantity here; although I suspect that some of these songs might play better live than on CD. In any event, when Ashley Pond Band gets it right you want to be there listening. There's a great deal of potential here.

You can learn more about the Ashley Pond Band at www.myspace.com/ashleypond. You can purchase The Warning on CD from www.cdbaby.com/cd/ashleypond.
Posted by Wildy at 5:00 AM