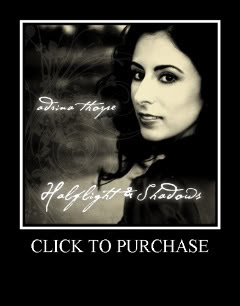 Adrina Thorpe gained a great deal of popular attention from her debut album, Elusive, placing songs in shows from CW and Lifetime networks as well as independent films. Her song Who Will Find Me was proclaimed by DJ Armin Van Buuren to be "his favorite song of the last two years". Thorpe's follow-up CD, Halflight & Shadows, brings no sophomore slump for the performer whose songwriting walks the line between darkness and light. With an all-star band of cohorts including producer Filippo Gaetani; drummer Randy Cooke (Mick Jagger, Ringo Starr, Five For Fighting); cellist David Takahashi (Sting, Sheryl Crow, Kanye West); violinist Chris Woods (Justin Timberlake; Jessica Simpson) and drummer Fernando Sanchez (Luis Fonsi, Charlotte Martin), the classically trained Thorpe has managed to create a true aural experience for the listener. The blending of Classical, Folk and Rock styles dazzles with flashes of brilliance and magical undercurrents of melody and harmony.

Halflight & Shadows opens with Impossible Dream, a mid-tempo ethereal rocker in the style of Sarah McLachlan. Thorpe has a stunning and haunting voice, in turns, occasionally affecting the style of McLachlan or even Tori Amos while carving out a niche that is mostly her own. Impossible Dream carries with it a lost and searching sense that fits the song perfectly. Midnight is a dark and mysterious love song with an interesting mix of instrumentation. You'll hear everything from piano to orchestration to electronic sounds; a gorgeous and haunting mix. Everything Changes is about letting go of a bad relationship and places some of the thought process in song. The song is lyrically dense at times in the verse which is balance by an ethereal yet economic chorus.

Domino highlights the fact that once you know the truth your options are pretty limited. The song is gorgeous and dark and full of a barely contained anger that struggles with the narrator's good nature. This one sounds like it could be a Tori Amos outtake, with a piano style reflective of Amos' work and a vocal style that's almost dead on at times. Driving finds Thorpe in a place that is dark, vulnerable and full of need. The tune is unforgettable, halting and striving in turns with the turn of emotion that drives the narrator. The car ride is simply an encapsulation for a journey the narrator is consumed with. Coming Home is a song about running from what you need; sometimes when the prodigal child returns home facts have changed and people have moved on; A powerful and emotive track with a lush sound.

Walk is very much reflecting of Sarah McLachlan's earlier work. Dark and stormy and full of volatile emotions, Walk reflects a primitive beauty at war with need. Moment To End is probably the most beautiful vocal on the disc; the song gets caught up in the obsessive nature of the moment and repeats the title until it nearly hits a breaking point for the listener. This is either a miscalculation or an attempt to instill the sort of cognitive and emotional dissonance in the listener that the narrator feels. Kiss The Day is a highly melodic and vaguely ethereal Lilith Fair Pop-Rocker. The subject is a bit convoluted but it's sonically pleasing. Give You My Love is a sweet and open love song that holds no hidden traps or equivocations. It's a refreshingly honest and pure love song set to a haltingly beautiful melody line. Thorpe closes out the set with Seed, a six-minute piano and voice odyssey that's part epoch poem and part journal entry. Thorpe keeps listeners on the edge of their seat as she unfolds a story, spoken to another, about the prospects for love, life and happiness. The vocal is drop-dead gorgeous in a song that sounds like it could be the introduction to a stage show. This is the sort of tune that unfolds in concert to utter, unbreakable silence that explodes into a cacophony of applause at the end. It's the perfect close to the album.

Adrina Thorpe is an amazing songwriter. She's obviously been influenced by folks like Sarah McLachlan, Tori Amos and even perhaps Kate Bush. You can hear these influences in her music but at the same time Thorpe has taken those influences and wrapped them up with her own personality and style to create something distinctive. Hers is a voice that would stop people on the streets of a place like New York City, and the arrangements she crafts are perfect frames and backgrounds for the stories she tells in her songs. Halflight & Shadows is brilliant; a Wildy's World Certified Desert Island Disc. Don't miss it.

You can learn more about Adrina Thorpe at www.myspace.com/adrinathorpe or http://www.adrinathorpe.com/, where you can order Halflight & Shadows as either a CD or download.
Posted by Wildy at 5:57 AM