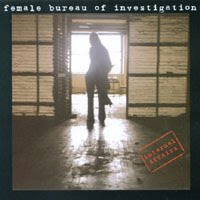 Female Bureau Of Investigation is the creation of Sasha Sumner, who sings, plays sax and writes the band's material. Starting out as an all-girl band, Sumner is the only original member left. Female Bureau Of Investigation these days consists of Sumner, percussionist/vocalist King Solomon, trumpeter Atsushi Tsumara, trombonist Reut Regev, keyboard player Bob Huott, bassist Steve Doyle and drummer Rich Kulsar. The band is back with their second album, Internal Affairs, mixing elements of Jazz, Blues, Rock, Reggae and Funk.

Internal Affairs opens with Gotta Let Go, a message to a suitor to get over past loves and get in the moment. The quasi-experimental jazz feel makes Gotta Let Go feel like something of a Cabaret piece. Sumner's voice may remind readers of Monica Attell but with perhaps a slightly more lyric quality. Paradise is part Samba and part musical soliloquy. The vocal harmonies in the chorus/breakdown are pleasing to the ear, and the rhythmic nature would make great dance material. The base arrangement is fairly simplistic, providing a base from which instruments can break out and improvise. Feel Something sticks with the vaguely Latin feel while playing with minor and perhaps even middle eastern scales on the saxophone. The song is very self-assured yet insecure monologue on a prospective relationship that gets a little stuck in its own precepts.

Down Down Down is either a celebration of dance or oral fixation; or perhaps both at once, and sounds like something that might have been penned by Julie Brown. It's a great dance groove but is a bit lyrically inept. Inchworm offers an interesting mash-up of an original bit of poetry set to music and the children's tune. The song is a study in funk and jazz. Internal Affairs closes out with Last Night, a bit of melodic chaos that tries to dig into a slightly heavier, grungy feeling rock mode. It's an apt close to the album, a logical conclusion where things begin to fly apart at the seams.

That's been the destiny of Internal Affairs since it first began to spin -- there's an essence of entropy here, like Female Bureau of Investigation might lose their internal balance at any time and simply fall apart into some form of chaos. There are some great musicians here, and Sasha Sumner has a voice people will want to listen to, but the songwriting style is more like sewing together musical pieces that don't entirely fit together. The end result is an album with a lot of great parts that never really come together to create a strong listening experience.

You can learn more about Female Bureau of Investigation at http://www.sashasumner.net/. You can purchase Internal Affairs as either a CD or download through CDBaby.com.
Posted by Wildy at 5:30 AM