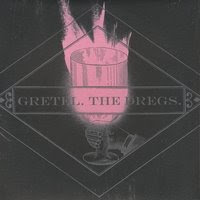 New England anti-folk trio Gretel is led by the enigmatic and engaging Reva Williams. The band recently released their sophomore CD on Eyeteeth Records. The disc, entitled The Dregs, mixes it up with the lowest of the low and finds beauty even amongst the lost, the forgotten and the hopeless. The Dregs illuminates beauty with dark light infused with the hope that even the hopeless hold onto.

The Dregs opens with Turn The Lights Back On, Pt. 1, a plodding coffee house piece with some interesting vocal harmonies. The song covers the bases of hatred, indifference and self-disgust and is a tough intro (more for the arrangement than anything else). Car Bomb Times laments the times we live in, like the fact that people can afford to self-medicate but can't afford to see a doctor (although this could be a double-edged argument). The minimalist arrangement uses vocal harmonies to build balance and contrasts and is very much off the beaten track; a great tune. Jesus! (Where Did You Go?) continues the general theme of Car Bomb Times, questioning where God has gone in a society that seems to be winding down. That Great History is a wonderful and frustrating musical venture. At 1:20 in length, it's just too short for how good it is. The selfish listener in me wants Gretel to realize this is a full-length tune, although the musician in me recognizes it might not be what it is if forced to be more than it's meant to be. Sheesh.

Renegade is a decent country tune about falling for bad boys, but is a bit different than the typical song in that realm. The narrator here is a tough woman, a plains woman perhaps, and can very much hold her own. Do Over is a song for the morning after, the day after or any of the countless missteps we make in life. The subject matter could get moral but Gretel stays away from such issues except perhaps by subtle implication. O Put Me Under is a wonderfully confounding listen. How can a song be lush and sound primitive all at once? You'll ask yourself this time and time again as you keep hitting replay. O Put Me Under is heartfelt and powerful; a pure expression of sadness that isn't so much sorrow as resignation. Turn The Lights Back On, Pt. 2 is amazingly, wonderfully schizophonic, drawing on sounds as diverse as Rock, Folk and Dixieland Jazz in a musical experience you won't soon forget. Don't bother with traditional music structure; Gretel certainly didn't here, but they did manage to create a significant song that deserves some serious attention. The Dregs closes out with Your Flame, a decent tune in its own right that is unfortunately anti-climactic after Turn The Lights Back On, Pt. 2.

I badly wanted to pull this disc out during the first song the first time I listened to it. I had so much ill will toward the disc and the band from the first song that it wasn't until about the fourth or fifth song that I realized The Dregs is something special. I still don't particularly like the opening track, but the rest of the disc is absolutely unforgettable. It's perhaps an acquired taste, but Gretel has an amazing vocalist in Reva Williams, and writes atypical, memorable songs that should help them build a rabid (if moderate) fan base. Make sure you check out The Dregs; you won't be sorry.

You can learn more about Gretel at http://www.gretelmusic.com/ or www.myspace.com/gretelmusic. You can purchase The Dregs either on CD or as a download at www.cdbaby.com/cd/gretel2.
Posted by Wildy at 6:16 AM

I love this album! I listened to it over and over, and didn't take it out of my CD player for at least 3 weeks. It comes across to me as a concept album. In this light, the first song is an appropriate beginning--a start at the bottom, empty of goodness. Its weirdness fits the subject. I don't think you're supposed to "like" it exactly (which I pretty much don't). The final song is sort of a coda for me--continuing the theme of pouring out and filling up, and suggesting that the process described from "Turn the Lights Back On, Pt.1" through "TTLBO pt. 2" is a repeating cycle in some way, shape, or form. For me, this is a 5-star album. I want them to have more money to make more albums of this caliber. BUY THE DREGS, MAN!