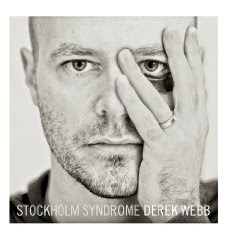 Derek Webb is a trailblazer. Webb was an integral part of the creative force of Caedmon's Call until his departure in 2003 to pursue a solo career. While Caedmon's Call continued without Webb, the band was never quite been the same. On his own, Webb has proven to have a keen eye for the business side of music, using unique marketing techniques to drive up concert attendance and ultimately launch a new online music distribution system called NoiseTrade. On September 1, 2009, Derek Webb releases his latest album, Stockholm Syndrome. Webb co-produced the album with former Caedmon's Call bandmate and hip-hop producer Josh Moore (Bun B., Slim Thug). Webb has abandoned his folk/pop ways for an electronic sound that draws on hip-hop beats and musical styles that range across the entire Pop music era.
Stockholm Syndrome is all about becoming a prisoner to society, technology and any other icon that may influence day-to-day life, and is structured loosely like a story. Black Eye starts out with tendency of people to stay in familiar situations even when they are uncomfortable, using relationships as an example. The song is built in a heavily fortified electronic arrangement but takes a curious turn with a Beatles-esque chorus. Freddy, Please has a vocal line that sounds like it was taken right out of a late 1950's Pop song. The allegory here is unclear and the lyrical content floats on top of the song like an unkempt child, making for a confusing but intriguing listen. The Spirit Vs. The Kick Drum underlines both societal and individual obsession with worldly objects and institutions in an arrangement that sounds a bit like U2 in their "techno" phase. The State is a song of bittersweet regret from one who has thrown their lot in with the power brokers but still remembers the beauty of the world before. The song follows the corruption breeds corruption concept of power and expresses a duality; a desire for the way the world was as well as a continued desire for the destructive path of the state.

I Love/Hate You continues with this duality of man, this time in a relationship. The protagonist loves the person he's singing to and yet hates being tied down to her. He needs her but wants to push her away. The song itself is artfully written, although I think this would sound better with a more organic arrangement. The church-like organ flourishes seem to suggest that the traditional sense of commitment (marriage) hangs over the relationship and that is part of what fills the narrator with dread. This could be an extension of an earlier concept in The State that suggests the unwinding of traditional values as a means to consolidate the power of the state. Becoming A Slave marks the downfall of choice through choice, showing an Aldous Huxley vision of the future of mankind based on the current societal trends.

Heaven is a puzzling tune. It returns largely to the folk/acoustic background from which Webb comes, but conjures a post-modernist vision of the afterlife that almost has to be allegorical. I am not sure what exactly he was going for but I didn't walk away from the song understanding the vision behind it. What You Give Up To Get It is a morality tale that sets much of Stockholm Syndrome in bas relief against the light of logic. The song has a highly infectious rhythm that will translate well to the club scene (although the subject matter may be a little too substantive for mindless dancing). Webb closes out Stockholm Syndrome with American Flag Umbrella, exploring in philosophical terms the divergence of the American dream of liberty & equality for all and the whims of a populace governed by fear. The song is highly intelligent and likely to labeled irresponsible and dangerous by the political right; visionary by the left, and much discussed the real people in the middle.

Stockholm Syndrome, musically speaking, is more like an intellectual publication than popular music. The concepts and delivery are a bit heavy-handed and seem to draw unspoken lines between the current social and political environment in the US and stories such as 1984 and Brave New World. Musically speaking the album is something of a wash. The music is background against which Professor Webb details the decline and fall of Western Society but doesn't necessarily offer anything new or exciting. On the whole it's a very strong work, however whatever Webb has gained in flexibility by moving to a digital music environment is countered by a loss of nuance and color may help illuminate this story all the more.

You can learn more about Derek Webb at http://www.derekwebb.com/ or www.myspace.com/derekwebb. Stockholm Syndrome hits the streets on September 1, 2009. You can pre-order your copy through Amazon.com.
Posted by Wildy at 5:10 AM