Review: The Lovely Feathers - Fantasy Of The Lot 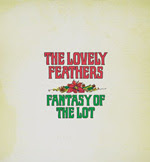 The Lovely Feathers - Fantasy Of The Lot
2009, Sparks Music/Tommy Boy

Just a few years ago The Lovely Feathers were being hailed as the next big act out of Canada by outlets such as Spin Magazine and Rolling Stone. Life intervened; one member fell in love, another went to school, and so on and so forth. Indefinite hiatus became the band buzzword, yet life is a circle. The time off refocused the band's personal and musical priorities, and The Lovely Feathers are on the verge of re-claiming their position as the Next Big Act out of Canada. On August 18, 2009, The Lovely Feathers will release their sophomore album, Fantasy Of The Lot.
Fantasy Of The Lot opens with Lowiza, lamenting the loss of a sex drive in marriage. The song has an urgent quality to it, with the Lovely Feathers sounding a bit like The Talking Heads. Long Walks is a quirky Brit-Pop wonder that you won't be able to get out of your head. Finder's Fee is all about dysfunctional relationships and why people stay in them. It's jangly Brit-pop at its most austere and quite a decent listen. Fantasy Of The Lot seems to juxtapose the reality of life with the escapist fantasy of the silver screen. The song it artful and well written but feels incomplete, almost like a daydream you're roused from too early (which may well be the point). Ossified Homes is a great listen, lamenting the fact that the flexibility of youth is replaced by the hardening of choices and paths as we progress through life. The songwriting here is superb. Vaulted Precedents is built on the best pop hook on the album and harmonies that would make Crosby, Stills & Nash proud. You could wear out the repeat button on this one. It's not a complicated tune, but gets in your head and won't let you go.

Fantasy Of The Lot took some work to review. This is not a disc you get on the first listen, or even on the first few. Dedicated listening over a period of time pays its rewards, but casual listeners won't get into this unless they're naturally oriented in the same musical direction as The Lovely Feathers. The songwriting is quirky and enough off the beaten path to seem strange and unusual, and wonderful once you figure out what's going on. I highly recommend Fantasy Of The Lot, but suggest you save it for a time when you can really concentrate on the album.
Rating: 3.5 Stars (Out of 5)