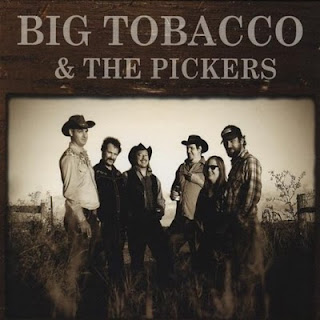 Big Tobacco & The Pickers - Big Tobacco & The Pickers
2010, Big Tobacco & The Pickers
Big Tobacco & The Pickers are a Southern Ontario-based sextet that blends the outlaw country of Johnny, Merle, Waylon and Willie with the folk/rock sensibilities of The Band and occasionally the offbeat feel of Luther Wright & The Wrongs.  Songs of hard living, hard drinking and occasional forays over the line of legality are the order of the day, delivered in a no-nonsense manner that is full of the charisma of lead vocalist Jamie Oliver.  Big Tobacco & The Pickers, the band's self-titled debut, delivers on the promise of the band's live shows, and announces Big Tobacco & The Pickers as one of the bright new stars on the alt-country horizon.
Big Tobacco & The Pickers open with “The Drunker You Get”, a musical take on the classic joke about the quality of the band’s music in direct proportion to the amount of alcohol consumed.  Vocalist Jamie Oliver shows tremendous charisma and showmanship, and the band matches him step for step.  “Whispering Palms” is a northern-dweller’s lament missing his home in the south.  The song has a nice, classic-country feel, like something you might have heard on country radio a generation or two ago.  “Time Ain’t On Your Side” laments the time spent as a young kid/adult ‘running from the mines’.  It’s a song about big dreams, the wasted pursuits of youth and never quite ending up where you intended.  This particular story/song includes a side bar in prison and a lot of regret, but also a thread of pride and fond remembrance deep beneath the surface.  The arrangement is a thing of beauty, and the vocal harmonies sublime.
“Return To Sender (Say It Ain’t So)” is a monologue from a man who has been untrue and has been exiled from his marriage and children.  Now he has been served with divorce papers and is suffering the ultimate regret for his past actions.  The song is delivered in a straight-forward country arrangement with a fine melody.  “Lonesome, On’ry And Mean” is pure fun; a likely favorite in the live set.  This is the sort of deep album cut that can become a cult favorite.  “My Own Hell” is about two lost souls drinking to their misery together. He somehow shows enough judgment, however, to leave her sleeping on the bar rather than going home with her and making things worse.  It’s a sorrowful but pragmatic turn that’s a bit atypical for popular music in any genre.  “No Good Gal” is pure singer/songwriter/country about a lady who is nothing but trouble.  Three years in and he’s finally moving on, but the tongue-in-cheek story telling makes it clear she’s been nothing but trouble.
“I’m Fine” is all about getting over true love.  Set to a waltz, he acknowledges not being over her, but consoles himself with women, whiskey and the road.  “Livin’ By Rolling The Dice” is catchy, bluesy rock n roll; an outlaw country tune with a classic rock pedigree.  This one’s a lot of fun, a sure-fire hit in Big Tobacco & The Pickers’ live shows.  “Beans For Breakfast” sounds like something that might have grown out of a jam session between Johnny Cash and Luther Wright.  It’s a tongue-in-cheek song about a man living on the dregs of life.  “The Legend Of Ma Barker” is a great story song about the notorious maven and her criminal activities.  Edgy and entertaining, this is the sort of song that will inspire whoops and hollers in a southern bar on a Saturday night.  It’s flat out great songwriting and a sharp performance.    “Big Tobacco & The Pickers” closes with “Sing Me Back Home”, commemorating the power of music to take us back in space and time to home.  It’s a touching and heartfelt tune without a bit of schmaltz.
Big Tobacco & The Pickers are the real deal.  Mixing elements of classic country, southern rock and down home, self-deprecating humor, Big Tobacco & The Pickers have created an album that stands on its own.  Vocalist Jamie Oliver is personality plus, selling every song as if his life depends on it, and the band is as tight and interconnected as you could hope for.  Big Tobacco & The Pickers has one or two slow moments, but overall is a great reminder of what country music was meant to be.
Rating: 4 Stars (Out of 5)
Learn more about Big Tobacco And The Pickers at www.myspace.com/bigtobaccoandthepickersband.  Big Tobacco & The Pickers is available from Amazon.com as a CD or