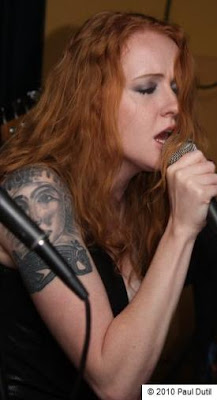 Every so often we hear about the next Janis Joplin on the scene, and there's no way that vocalist Alison Lee (aka Ali Schelin) is going to escape such comparisons. With a dynamic voice that falls somewhere between the rough abandon of Joplin and the dynamic growl of Michelle Malone, Lee ignites the demo's first song, "Wrecking Ball". The rest of Infinite August provides an adequate acoustic-based blues rock backing, but it would be mundane without Lee in front. Infinite August does show off some instrumental prowess in the breakdown, but the only thing here that distinguishes Infinite August from a thousand other blues-based bar bands is Lee (with a nod to bassist Ian Hamel and the un-credited keyboardist. On "Curves To Cope", Lee shows suppleness and grace (and a smoother sound) than we heard on "Wrecking Ball"; it's the best overall performance on the three song demo - the sort that could enthrall a crowd. Closing with "April 4th", Lee and Infinite August foretell their own fate as a band ("I'm addicted to your love but it's the wrong kind"). It's a dynamic performance, and preceded the departure of Lee and Ian Hamel.

The Infinite August demo was submitted by the remaining members of the band; a curious choice considering the dynamic heart of the band is now gone. The band as constructed at the time of this demo had a very promising future. The band itself is competent but doesn't show anything here that really sets them apart. What did set Infinite August apart was the presence of Alison Lee, who should be very much on the radar of anyone interested in following up-and-coming blues/rock female vocalists. As for the rest of Infinite August, we won't really know what they have until they reconstitute the band and record some material with their new lineup. What Infinite August may have accomplished is ruining the material presented here for the next vocalist. Alison Lee set the bar high.

Alison Lee is currently developing material and you can follow here progress at www.myspace.com/alisonleemusic. You can track Infinite August's rebuilding process at http://www.infiniteaugust.com/.
Posted by Wildy at 5:10 AM

What an amazingly well-written review that captures the situation of what's really going on. As a former fan and champion of not only Alison but Infinite August I was truly disappointed over what I had learned about why she left. It's unfortunate. They were clearly on their way to unknown successes. Those who neglect to crucify their ego and nefariously work towards their own gains will always lose. Alison hasn't gone away. She's currently working on a project that will no doubt be embraced by those who love her and that amazing voice.

Some years back, I had the pleasure of working with Al when she sang on some of the recordings and live shows for my band, the Atomic Scissors. She's dynamite!

I'm pleased she got singled out for her tremendous voice, commitment and presence. She's a fun person and a pleasure to work with, so I hope her new project is as intriguing and innovative as her previous work.

Agreed that Infinite August was on their way to unknown successes. Disagree that anyone in the band 'nefariously' worked toward their own ends or even had an ego to speak of. This is a baseless, even delusional accusation.

Ali's talent is immeasurable. I'm sure she will be successful in the future and we wish her all the best at Infinite August.

Infinite August is in the process of auditioning new lead singers, and will be up and running next month.

Glad you got such good press from this Ali ;) (both sites this dude listed lead to your music, haha)

This says your bassist quit too... why don't you refer to his departure or talk about auditioning for his replacement? Wouldn't it have made more sense to just start a new band? Good luck, buddy.

I worked with Ali, great singer and very reliable

Excellent review, and certainly an astute comprehension of Ali's sublime voice. Too bad the band split, but her vocal charisma easily insures her another success story.

Alison remains one of my favorite singers and her departure signifies a serious challenge to Infinite August.
I had the pleasure to work with Alison years ago in the Atomic Scissors and she impressed me with both her perfect pitch and attention to detail.
I would love to get her in the studio again (hint, hint) and record her on some of my projects.

I can't wait to see what new material will develope from Alison as she moves forward! As a fan of her work with the Pittsburgh band The Cause I am continually impressed by her vocal talent. I will be following her progress with great interest!

As a fan of Alison's work with Pittsburgh band The Cause I can't wait to see what new developments her new musical endevor will bring! I will be following closely!