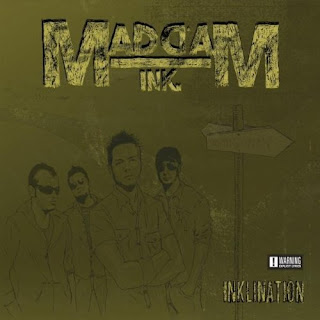 Maddam Ink is an Allentown, Pennsylvania rock quartet that’s been kicking around The Queen City since 2004. With their roots planted firmly in classic hard rock music, Maddam Ink greets the day with an eclectic and satisfying mix of classic and modern alternative rock sounds. This blend comes blasting out of your speakers on their debut album, Inklination.

Inklination falls somewhere between pop/metal and grunge with a mix of sharply written and slickly produced songs. This blend works well at times and falls short at others, but the overall impression left by Maddam Ink is of a competent heavy rock band with decent pop credentials and the ability to fill up a space with sound. "Carry Me Home" is highly enjoyable heavy rock that's a bit reminiscent of Pearl Jam and is the most likely single on the album. "Believe" is perhaps the best songwriting on the disc; he's caught her cheating but he's caught in his need for her. It's an exploration of conflicting emotions and the webs that bind people together sometimes against better judgment. "Touch" is essentially a musical request, nay demand, for felatio, while "Innocence is an angry admonition of a woman who has used her seductive power to rob the story-teller of his naiveté.

"Speak" finds Maddam Ink entering the power ballad market with a disaffected song about love gone sour. The mix of acoustic and electric sounds helps freshen up a genre and sound that can be very stale at times, and Maddam Ink injects some serious vocal harmonies into the mix. "Coletrane" finds Maddam Ink driving back into their heavy rock sound once again with a vengeance in a song about the conflict of wanting someone but knowing you aren't right for them. "Save The World" is a more typical power ballad with a distinct pop sensibility that makes it a candidate for pop radio. Maddam Ink closes with the big sound of "Special", a crunchy guitar-driven tune ruminating on a relationship on the sour. It's a big bang of a close for a dynamic and enjoyable rock album.

Maddam Ink brings the rock n roll on Inklination, a solid and entertaining rock album that features some of the grunge-edge of 1990's Seattle bands but includes some of the big rock glam of the 1980's. Maddam Ink makes a couple of attempts to appease programmer's commercial instincts, but most sticks to what they do best. If your tastes run to the heavier side of rock n roll but no quite into Screamo territory then Maddam Ink will be right up your alley.

Learn more about Maddam Ink at http://www.maddamink.com/ or www.myspace.com/maddamink.  Inklination is available as both CD

from Amazon.com, and can also be acquired digitally via iTunes.
Posted by Wildy at 6:17 AM

Pretty worthwhile info, thank you for the article.