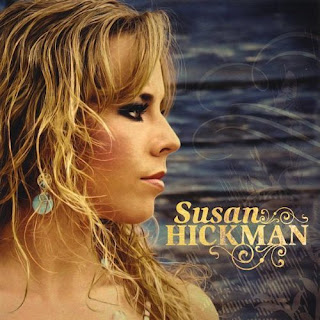 Susan Hickman might just be in the right place at the right time. The 25-year old Houston native has honed an explosive live show over the past few years, mixing rock and country in a vibrant fashion that seems to appeal to fans of both. Not since Garth Brooks has an artist so completely brought rock n roll energy to country music. The proof is in the pudding, as it were: Susan Hickman's self-titled debut album drops July 20, 2010, and is poised to break through the walls of commercial country radio as one of the hottest Indie debuts of the year.

Hickman gets things started with "Wrapped Up In Me", a classic-sounding country come-one song; a great tune with big pop sensibilities and a down-home flavor. Hickman can sing with the roar of Janis Joplin or the sweet sound of Miranda Lambert, changing speeds at the drop of a hat. The only real misstep on the entire album is the second track, "RED" a song about the anger of a relationship's third wheel. Hickman sounds overwrought here to the point of shrillness, belting her way through a song that just isn't up to the level of the rest of the material on Susan Hickman. "Hell Still Ain't Frozen Over Yet" is the first single from the album, a solid country song of heartbreak.

"Sunday Paper" is bound to be an anthem for ladies' night; a "get lost" tune that's a lot of fun. Hickman goes for the big meaning on "One Of Those Who Make It Up There", a song about the large impact small actions can sometimes have. The song vacillates between the benefits to others and the benefits to self of doing good works for others ("And who knows if the one you're helpin' just might be the one who's keepin' score"). "You Just Missed This Train" is bound to be another ladies' night anthem, and seems the sort of tune that could break hard into the Top-40 charts with the right push with its mix of humor, confidence and sex appeal.

"Friday At The Latest" tackles getting over a lost love with an age-old methodology: procrastination. It's a cute number done up for dancing at the local honky-tonk; a great listen. Hickman ventures into the quasi-spiritual realm again with "Wounded Heart", a song about heartbreak and angels. It's a sweet message wrapped up in a pleasant melody that's worth a listen or two. "Do Me A Miracle" is pure schmaltzy love song, a down moment that leads into Hickman's vibrant cover of Gregg Allman's "Whipping Post". Don't let the fiddles fool you, Hickman goes all rock n roll here while infusing the song with all of the pathos of the original.

Hickman's lead single, "Hell Still Ain't Frozen Over Yet" is a solid introduction, but after hearing the rest of the album you'll wonder who made the decision about which song to lead with. There are at least three other songs on Susan Hickman with solid Top-40 Country credentials; two with the potential to be major hits. Susan Hickman is the sort of an album that not only establishes an artist but turns her into a star. Between this and her live show, Hickman could be on the verge of the sort of meteoric rise that every artist dreams of.