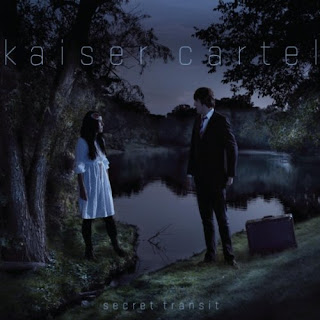 Brooklyn duo and Wildy’s World Artist of the month for July 2010 Kaiser Cartel are at it again. Known for creating unusual and strikingly beautiful pop/rock songs, Kaiser Cartel launch forward into 2010 and beyond with Secret Transit. Secret Transit is the follow-up to 2008’s March Forth, a brilliant and ultimately tuneful album that received critical raves. If Secret Transit falls short of the bar Kaiser Cartel set with March Forth, it would be comparable to a world class sprinter missing the Gold by hundredths of a second.

Secret Transit opens with "Riverboat Dream" a darkly beautiful, ethereal musical experience. Courtney Kaisers's voice is haunting, and Benjamin Cartle’s provides a lonely, comforting harmony. This is a song that will stick with you long after the album's stopped playing. "Carroll Street Station" is a uniquely New York City experience that you'll only truly get if you've lived there (or in a similarly large city). "Carroll Street Station" displays the ultimate irony of Kaiser Cartel, their ability to create beautiful and fluid melodies in the midst of garage/folk arrangements. "Brave Enough" holds hints of Sarah McLachlan in a pretty, easy going ballad that shows off Kaiser's voice in fine form. In a musical 180, Kaiser Cartel recalls Liz Phair with "Worn Out Nervous Condition", a gritty acoustic rocker about relationship angst.

"Around You" is a lush pop love song; a sweet and tuneful song of longing that has real impact. This quiet power of Kaiser Cartel to touch listeners doesn't show up in every song, but has reared its head occasionally across their albums. It's safe to say it's never been quite as powerful as it is here. "Ready To Go" is a highly catchy tune, showing off a low-key but active melody that calls to mind a hyped-up version of The Cowboy Junkies. "Memphis" is perhaps the finest songwriting on the album, a low-key folk/rock song that combines stark and sweet while somehow detracting from neither mood. Secret Transit winds down with the dark ballad "The Wait". The slow, low-key song descends into the cognitive noise of dreams at the end, but serves as the perfect vehicle for appreciating Kaisers's heavenly voice.

Kaiser Cartel have developed a sound that's distinctly their own while giving knowing nods to several diverse artists. With Secret Transit this blend of influences has become an alchemy that's impossible to ignore. While low key in approach, there is tangible life in the songs on Secret Transit, and Kaiser Cartel have never sounded so lush and in the moment. Courtney Kaiser may have one of the most listenable voices in Indie Rock, and it seems like the day when Kaiser Cartel are playing to larger and larger artists must be right around the corner.

Learn more about Kaiser Cartel at http://www.kaisercartel.com/ or www.facebook.com/kaisercartel.  Secret Transit is available from Amazon as either a CD

.  The album may also be downloaded from iTunes.
Posted by Wildy at 5:10 AM