Terry Holder - Ticket To The Moment 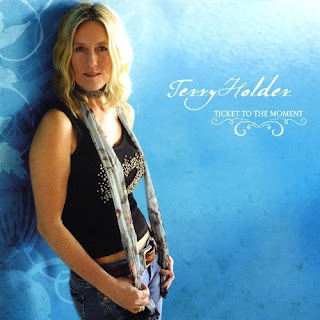 Terry Holder found her musical calling late in life. A stay at home mom for many years, Holder's youngest child left for college around the time her own mother died. These radical changes enveloped Holder in an emotional whirlwind from which she escaped through writing songs. What started out as catharsis quickly turned to career. Holder's debut album, 2001's Am I Here Is This Me, garnered critical acclaim and notable sales from an independent folk release. Her second album, Colored Rooms, furthered Holder's reputation as an honest songwriter who built stories out of human events and human emotion. Holder returned with her third album in 2008. Ticket To The Moment represents a step forward for Holder. Several years on the road have seasoned her songwriting abilities and helped her develop a story-teller's touch to go with her honest, emotive folk songs.

Ticket To The Moment opens with "Cross Your Mind", a gentle pop song with a bit of backbeat. Holder has great energy here, mixing tough and vulnerable and a pleasantly earthy voice that's a pleasure to listen to. "In God's Eyes" is a song of existential angst & a call to begin living life as opposed to simply letting it happen. "Wrecking Ball" is a brilliant performance that Holder wears as if it were her own story. On "Satellite", Holder captures the act of falling in love in meticulous and poetic grandeur. It's a tremendous example of deft songwriting as Holder brings you into the moment.

"Turn The Car Around" is a dynamic rocker about finding love when you least expect it and when it's least convenient. It's a wow moment; an amazing bit of songwriting that's destined to be covered by others. "When Will I Be Loved" is a melancholic turn with a great melody that shows off Holder's voice in very positive light. "Don't Forget" is a solid love song with a memorable melody and arrangement; the sort you'll be humming along with the first time you hear it. Holder hits a social justice theme with "Crack In The Sidewalk", a song bemoaning society's failure to care for its weakest members. The song has an almost martial air at times, an interesting mix within the country/rock arrangement Holder has crafted. Holder closes with a pair of low-key tunes, "Let's Go Away" and "Sail Goodbye".

Ticket To The Moment is a solid effort with a couple of bright, shining jewels in the crown. Holder's is the sort of voice that quietly catches your attention and holds it. She's not flashy, but her warm, earthy voice and subtle delivery have a way of sneaking up on you. If nothing else, Terry Holder has written some material here that will be revived again and again by other artists over the years. But if there's justice, there's a hit or two on Ticket To The Moment for Holder herself.

Learn more about Terry Holder at http://www.terryholder.com/ or www.myspace.com/terryholder.  Ticket To The Moment is available as both a CD

from Amazon.com. The album is also available from iTunes.
Posted by Wildy at 6:14 AM

I love Terry. She and Jerry have a great chemistry together. She's very charming live!