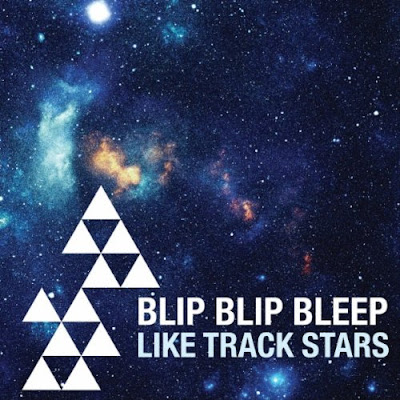 Blip Blip Bleep is Brooklyn producer Sean Han, with the artful assistance of Jojo Schwartz (drums) and Alexa Danner (vox/keyboards). Dancing on the delicate line between 1980's British New Wave and electro-dance styles, Blip Blip Bleep keeps growing their legend with each release. Out this week, Like Track Stars is Blip Blip Bleep's debut full-length album after two prior EPs. Like Track Stars starts out as a catchy affair, mining the undulations of electronic sound with a distinct pop sensibility and urgency before fading into a bland musical facade.

Like Track Stars opens with "Rock (Intro)", a musically intriguing but lyrically banal entr'acte that makes up for its repetitive nature with variegated rhythms and a musical wall-of-sound construction that engages listeners beyond the vocal line. "Freak You Out" is highly danceable electro-rock. While lyrically simplistic, this seems the most likely pop/dance hit on the album. "Already Pretty" raises the level of complexity of Han's songwriting a notch. The song has a driven feel and moves more to an alt-rock style/feel. The vocal harmonies here are very enjoyable, and the chorus is a solid attention grabber.

Blip Blip Bleep shows off its upbeat, high-energy dance music style on "Don't Forget" with a sound that fills your ears, making it easy to overlook the unsophisticated lyrical style of the band. Of course, they then turn around and serve up "Like Track Stars", a song about the urgency and freedom of youth or young adulthood, seen with the perspective and understanding of time. It's a poignant tune, perhaps a bit too busy with the electronics but well-wrought nevertheless. "Broken String" gets down to the 1980's Brit-pop style that seems to drive Blip Blip Bleep in a decent but too-busy tune. At this point it appears as if the band had run out of its best material but needed more material to fill out the album. "A Letter To Elise", "Rewrite The Scenes" and "Rock (Reprise)" simply don't live up to the energy or intensity of the rest of the album. Blip Blip Bleep then fills out the space with remixes of "Freak You Out" and "Rock", but both seem more like gimmicks to break into the club scene than artistic interpretations of the original versions.

Like Track Stars starts out fairly well but stumbles on the back stretch and limps home. This is one of those occasions when an album would better serve a band as an EP. That doesn't take anything away from Blip Blip Bleep. When they are on, Blip Blip Bleep is a very entertaining band with a sound that adeptly blends the sonic tempura of electronic music with the energy and urgency of rock music; they just reach a bit too far on Like Track Stars, filling in space with material that seems unworthy of its brethren. It's a solid 4 stars over the first six songs, but a bare 2 stars over the final five.

Learn more about Blip Blip Bleep at http://www.blipblipbleep.com/ or www.myspace.com/blipblipbleep. Like Track Stars is available digitally from Amazon and iTunes.
Posted by Wildy at 5:00 AM