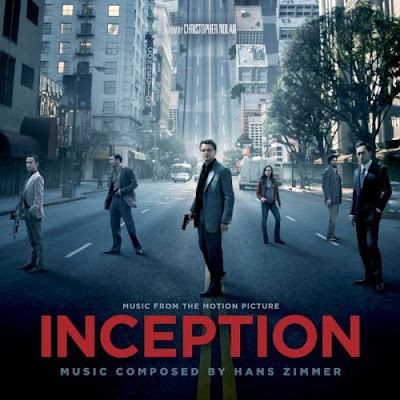 Hans Zimmer has written scores for some of the biggest films to come out of Hollywood in the last two decades. His Academy Award (8 nominations), two Golden Globe Awards (8 nominations) and three GRAMMY Awards (9 nominations) are a testament to Zimmer's unique ability to marry his creative craft to the theatrical visions of a wide range of film projects and directors. Zimmer's latest project (one of three scheduled for 2010) is the new Christopher Nolan Film, Inception. The soundtrack drops on July 13, 2010 with the film to follow three days later.

Zimmer immersed himself heavily in the digital world for Inception, a film about a shared virtual reality created for mankind to interact in (ala The Matrix) where the most coveted possessions are thoughts and ideas. The choice to go nearly all digital is thematically sound, but backfires a bit on Zimmer and on the film. The music from Inception is imbued with all of the drama and tension that Zimmer can muster from a computer, but the highs, lows and contrast just aren't the same as they might be with a real live orchestra. Guitarist Johnny Marr (The Smiths, Modest Mouse) sits in on eight tracks on the album, adding a distinctive tone to Zimmer's creation, but the creative dynamics long time listeners have come to expect from Zimmer never fully realize themselves here.

Zimmer sets appropriate moods throughout, weather with the rueful and weary tone of "We Built Our Own World", the ominous Hitchcock-flavored "Dream Is Collapsing" or the misty distant feel of "Old Souls". "Mombasa" is a rhythmic highlight, breaking out of the sonic mode of the album but falling into a repetitive trance that's disappointing. Zimmer begins to build toward a conclusion with "Dream Within A Dream", a powerful suspense-builder that is less than it might be based on the limitations of the electronic spectrum Zimmer works in. "Waiting For The Train", at nine and a half minutes should be the centerpiece of the album, and does contain a number of dramatic highs and lows but lacks the compelling edge that both Zimmer's talent and the premise of the film would seem to dictate. "Paradox", however, shows Zimmer near the top of his game, full of suspense and intensity that would translate even better from strings and bows than it does from electrical impulses. The album nearly fades away with "Time", which sounds almost incomplete with its near-sudden ending.

Hans Zimmer delivers with the score of Inception, offering up a musical guide to Nolan's film that is solid but mostly uninspiring. Even the best pitchers throw hanging curves once in a while, but we won't know whether this one just got away from Zimmer or whether the film it's tied to failed to inspire until Inception hits theaters later this month. What's clear is that even Zimmer's lesser works are startlingly good, and Inception is; it's just not up there with his best.

Learn more about Hans Zimmer at http://www.hanszimmer.com/ or www.myspace.com/hanszimmermusic. Learn more about Inception at inceptionmovie.warnerbros.com. Inception: Music From The Motion Picture drops on July 13, 2010. You can pre-order the CD from Amazon, or the the digital release from iTunes.
Posted by Wildy at 5:34 AM