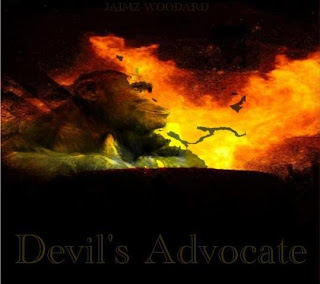 Jaimz Woodard is an up-and-coming songwriter, among other things. While in the process of writing material for what will be his debut album, Woodard was called to active duty in Iraq. On the verge of returning home, Woodard has not lost his muse and plans on continuing work on his debut album, Addiction. Woodard was nice enough to send along some of the songs he's working on for Addiction for review.

Woodard's title track, "Addiction", is an angry affair built within a spare arrangement. Woodard's voice isn't exactly what you'd call pretty, but he does bring a presence to the microphone that's undeniable; sort of like Trent Reznor without the histrionic sense of self. "The Cat's In The Cradle (2010 Iraq Deployment version)" is competent, although don't try to follow the melody line too closely, as Woodard has strongly reinterpreted it in post-melodic style or simply doesn't have a strong sense of pitch. "Hometown Blues" features acoustic guitar over the sort of canned electronic beat known to anyone who's ever owned a Casio keyboard; it's an ode to childhood friends and the tendency to lose touch with your roots as the tide of life carries everyone to their own destinations. "Rearranged" has a darker, heavier feel backed up against a programmed beat. The sound quality and composition is reminiscent of some of Steve Lieberman's lighter tunes, although Woodard's attempts at vocals can't match the yelled intensity of The Gangsta Rabbi. Woodard's demo closes with "Standing Here Today", the best songwriting on the album (thus far). Woodard still doesn't have a strong relationship with the melody line, or at least not one you'd expect. This is more of a distraction than anything.

Jaimz Woodard deserves all credit for the sacrifices made to go so far from home and fight for a much maligned cause in difficult times; he and his brothers and sisters and arms deserve all credit and support for standing up each day for an ideal of peace and liberty, regardless of what you might think of the political motivations of those who direct the war in which they fight. As a musician, Woodard is competent on guitar, and does show flashes of songwriting skill. The mixes presented on the early demo for Addiction are quite rough and may not be reflective of the planned full length album; an eventuality that would benefit Woodard greatly. The mixes offered here are FAFO (friends and family only); not really worthy of being put out as a commercial endeavor. That being said, "Addiction" and "Standing Here Today" both show real promise as a songwriter. The disparity in styles can be both positive and negative in a post-modern, post-genre music world, but these songs do suggest Woodard at least has real potential as a songwriter. Vocally, Woodard is closer to Wesley Willis than John Mayer; able to present only ghostLes of the fine melodies I'm certain he hears in his head. Addiction may turn out to be something good, but it's going to take a lot of work.

Learn more about Jaimz Woodard at http://www.jaimzwoodard.com/ or www.myspace.com/jaimzwoodard.  Addiction will not be ready until late 2010 or early 2011, but you can download a handful of Woodard's songs from Amazon and iTunes.
Posted by Wildy at 6:26 AM

I am glad you posted the music by Jaimz Woodard, I found it by looking at your site, but I have to disagree with your review. I listened to his music at the link you provided and I feel the vocals match the message that is being presented. I also heard another song, that was not mentioned, sinner's saint... why was this one left off?