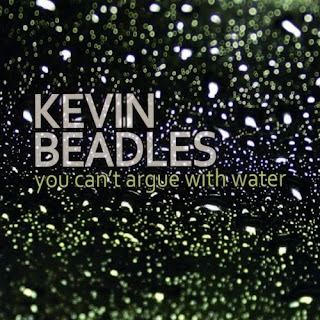 Kevin Beadles is a singer/songwriter from Berkeley, California who mixes strains of pop/rock, folk and Americana in a fashion that calls to mind Elvis Costello, Lucinda Williams and Ryan Adams. An Award-winning songwriter, Beadles has built a solid regional following in the Western US. On July 13, 2010, Beadles releases his debut album, You Can't Argue With Water, a collection of eleven tunes that shows off the highs and lows of Beadles' songwriting ability.

Beadles opens with "Shine", which might be one of the best pop/rock tunes to cross this desk this year. It's an optimistic number about love staying fresh and standing the test of time with a sing-along chorus that is likely to move into your cranium and set up for a long stay. "Shine" has huge commercial potential, both as a single and in the licensing realm. "Mrs. Jones Cadillac" is a morality tale about the way people hold on to negative emotions and the effect they can have. It's a solid, well-written tune with a country flavor. "High" shows off Beadles' dashing falsetto voice in a story of unrequited love. If you're like most people you've lived the story Beadles tells in "High" at least once; the song is a charming representation of the hopeful hopelessness involved.

"You Can't Argue With Water" is all about going with the flow in relationships and in life; a sense that there's a natural flow to things and that it's foolhardy to fight fate. The clothes make the man in "Sharkskin", an entertaining number about humanity's ability to fool itself into being stronger than we are. "Where We Came From" is a declaration of collective self from the band, and an acknowledgement of the need to be true to yourself. Things get slow for a couple of songs, but Beadles recovers nicely with "A Love Sublime". It's a catchy early rock n roll tune with a great vocal line and a low-key but snappy feel. You Can't Argue With Water closes with the sweet remembrance of "Indian Summer", a well-meant but cliché look back at an old love affair.

Kevin Beadles shows an ability to craft fine pop songs in various setting on You Can't Argue With Water. The occasional diversion into the musically mundane realms occurs, but on balance You Can't Argue With Water is a great listening experience. Beadles has a highly pleasant voice, and instrumentally his band is excellent. Some of the material here gets a bit too caught up in the sound to remember that energy lay at the heart of even quiet music, but after hearing Beadles at his best you'll be willing to forgive the occasional lapse.

Learn more about Kevin Beadles at http://www.kevinbeadles.com/ or http://www.myspace.com.kevinbeadles/.  You Can't Argue With Water is available as either a CD

from Amazon.com.  Digital copies are also available from iTunes.
Posted by Wildy at 5:00 AM