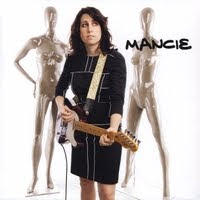 New York City post-punk posters Mancie dropped their debut EP last year after spending half a decade making music. The formerly Boston-based band blends punk attitude and energy with pop hooks but their debut EP lacks the energy you might expect from such a concatenation. Mancie opens with "So Well", an catchy/edgy rock tune that seems ripe for radio or licensing. "Say Say" is a bit more garage in presentation; a simplistic call out on a relationship with no future. "Don't Even Try" fizzles from a lack of drive, while the closing number, "Second Best" finds Mancie recovering a bit with a low-fi sound that has a modicum of pop sensibility. Mononomous vocalist Andrea occasionally sounds a bit like Chrissie Hynde, but struggles with pitch on a regular basis throughout the EP. Mancie doesn't have a gimmick that grabs you. While Andrea may have personality galore on stage, it doesn't translate on the EP, and with less than prime vocals and at-best average songwriting, there's little here to drive sales. If the personality is there live, then Mancie would do best to find a producer for their next product that can bring that out in the studio and on CD.

Learn more about Mancie at http://www.manciemusic.com/ or www.myspace.com/manciemusic.  Mancie is available as a CD or Download via CDBaby.com.
Posted by Wildy at 5:00 AM