The Russians - Crashing The Party 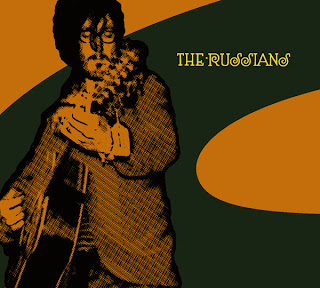 Boston's Scott Janovitz is back with The Russians, his collection of musical friends and accomplices who have released two critically acclaimed EPs in the past few years. Having played with Graham Parker, The Figgs and Dragstrip Courage over the years (among others), Janovitz has quite the cadre of friends to call upon for The Russians' first full-length album, Crashing The Party. Sitting in are Mike Gent (The Figgs, Death Vessel), Pete Caldes (Juliana Hatfield), Russell Chudnofsky (Lori McKenna) and Rob Dulaney (Sarah Borges), among many, helping Janovitz create the sort of lush and quirky pop album that blends influences as divergent as The Beatles, Pink Floyd, The Flaming Lips and Phil Spector.

Janovitz is the center of the album, with a voice as comfortable as an old pair of sneakers. He slips into the melodies like a second skin, and The Russians coalesce around him like a halo. Crashing The Party opens with "The Record's Over", a tuneful and melancholic song that mixes the melodic genius of The Beatles and the earthy undertones of Americana. Solid harmonies accent the depressed feel of the song. "Not So Loud" is peppy but dark, with a bass line that carries you along while Janovitz massages a bruised and beaten ego in melodic and slightly neurotic terms. It's a fun listen. "Sober And Un-Upsetting" features the melodic elements of Brit-Pop, wrapping them in a catchy and dark arrangement and an interesting mix of sounds.

"Crashing The Party" approaches instant classic status with a rock-a-bye feel that's almost a cadence. Janovitz has crafted a melody you'll want to sing along to in a song of longing so palpable it hurts. "You Know" is a low-key love song that's a bit formulaic but has a strong enough melody to carry it. The Lo-Fi melodies make the sound of this tune. The Russians take us on a cross-country flight ala Tim Burton in "The Ground Below", a catchy but bizarre recounting of a flight that you'll be hitting replay on again and again. "Measure Out Our Space" is one of those tunes you might have to listen to a few times to get; a song where the more you listen the more you peel back the layers to reveal the beauty inside. Mellow and stripped down, "Measure Out Our Space" has a melody line that grabs you slowly over time. The Russians take a turn for classic rock n roll with "Make It Easy", showing garage tendencies on the most addicting song on the album. Crashing The Party bows with "Lovesickholiday", a melancholic mellow rocker with a 1950's/1960's feel and a melody that stays with you.

Knowing some of the personnel on Crashing The Party and not being previously familiar with the band I wasn't sure to expect from The Russians. To be honest, I didn't take to the album on first listen, but Crashing The Party is one of those projects that call you back; the more you listen to it the more you'll like it. Scott Janovitz is a convincing if slightly surprising front man, and the cast of characters he's surrounded himself with are among the best least-known working musicians around. Crashing The Party mixes old and new in quietly dazzling fashion; and is likely to appear on a score of Best of 2010 lists.

Learn more about The Russians at http://www.therussianembassy.com/ or www.myspace.com/therussians.  Crashing The Party dropped July 13, 2010, but hasn't made it to internet outlets yet.  Keep checking back to The Russians' webpages for availability.
Posted by Wildy at 6:14 AM