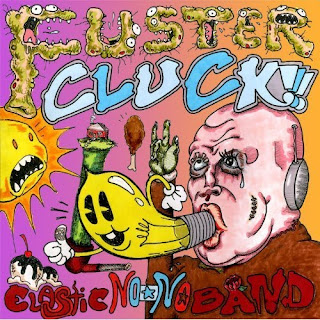 Fustercluck!!! isn't so much an album as a happening. Recorded live in-studio with little thought for sonic aesthetics, Fustercluck!!! will entertain you, shock and surprise you, infuriate you and generally get your panties in a twist. Imagine the demented approach to children's songs practiced by They Might Be Giants, the even more demented song stylings of Corky & The Juice Pigs and the low-fi, low-stress approach to songwriting practice by most adolescent songwriters and you'll have an idea where Elastic No-No Band is coming from. Built in and around the shell of an old exercise video, Fustercluck!!! sifts through humor and observation to get to a post-Americana sound that works well when the band plays together. They don't always, of course. It's difficult to point to specific tracks here, as the entire album is one long stream of social conscience that blends old and new ideas nearly seamlessly. Highlights include "Imaginary Girlfriend", where said girlfriend's improprieties are explored in detail, "Poor Jenny" and (Re-) Run DMC.

Elastic No-No Band isn't exactly a novelty act, but they can't quite escape the galaxy of that perception either. Fustercluck!!! is in turns entertaining and maddening, dodging between coherent songs and seemingly mindless or esoteric diversions. It's an entertaining hour and a half of dementia that makes up in adolescent chutzpah what it may occasionally lack in musicality or coherence.

Learn more about Elastic No-No Band at http://www.elasticnonoband.com/ or www.myspace.com/elasticnonoband.  Fustercluck!!! is available from Amazon.com as a 2-CD Set

.  The albums are broken down into separate downloads, Fustercluck!!! - Part 1

This won't really have effect, I consider like this.