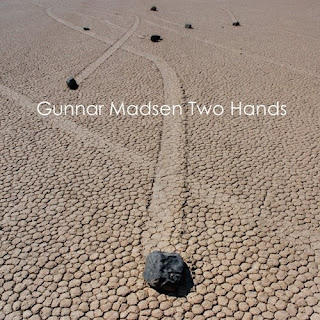 The first time I heard Gunnar Madsen's group The Bobs was on an episode of the Dr. Demento Show in the late 1980's. The song "Cowboy Lips" inspired me to go out and buy several Bobs albums and turned me on to acapella music. After ten years of The Bobs, Madsen has been involved in everything under the sun. He's written music for movies (Just A Kiss, The Break Up), television (Sex And The City, HBO's Asteroids), done voice work (HBO's The Rat Pack as Sammy Davis Jr.), released critically acclaimed albums for adults and children and even been nominated for a GRAMMY Award. Madsen's musical theater work (The Shaggs, co-written with Joy Gregory) has won awards for Best Original Score, Best World Premier Musical and Musical Of The Year from various groups. Every on the move, Madsen returns in 2010 with an album of solo-piano compositions (occasionally aided by Turtle Island String Quartet's Irene Sazer on violin) entitled Two Hands. Recorded at world-renowned Skywalker Sound, Madsen delivers a collection of sixteen songs worthy of its own award consideration.

Two Hands opens with "Break Into Blossom", a pretty, peaceful composition with its own internal vibrancy. The song builds slowly in strength and confidence like the budding of a flower, highlighting a pretty melody against the gentle but unyielding pressure of burgeoning life. "Kerenyi" has an opening line that sounds like a variation on Gershwin's "Rhapsody In Blue"; the comparison ends there however, as Madsen takes us on dark and moody journey with hints of Celtic music in its heritage. One of the more compelling pieces on the album is "Nino And Me", a depressed and disconnected waltz that deconstructs a noble beauty against the background of deep sadness. You'll have this particular composition on repeat.

"Ordinary Day" shows off Madsen's ability to hide simple beauty write in front of your eyes (or ears). The song has an incidental feel, but the pure sweetness of the theme buried in the mellow musical shell will call to you. "The Blackbird Whistling" feels exploratory, with a theme that comes alternatively in straight lines and scattered bursts. It's a wonderful juxtaposition of the steady feel of nature and the vibrant intercessions of life. "Frank Grows Flowers" is built around a similar concept, displaying the vibrancy of simple, every day actions while setting a pace that's simultaneously with purpose and at ease. There is a joyful feel to this song that cannot be denied. Madsen gets more pensive with "Down Moon", building to dark, muddy resolutions that push to break through but never quite manage, falling back into themselves to try again. The song comes to rest in a state of sadness, but there is a beauty in this struggle that shines through almost as a post-harmonic theme. "3 South Trail" finds Madsen treading a lazy/dreamy path with elements of melancholy woven in. It's a pretty set-up for the closing track, "Red Bird". "Red Bird" is jarring and beautiful, sounding at times like two separate and distinct thoughts occurring between piano and violin. This conversation occasionally aligns into brief moments of clarity where the two are so in-synch that you'll wonder how you ever thought otherwise.

Gunnar Madsen is one of those artists who seem likely to explode if he stops creating. Madsen's muse runs in some many directions it's dizzying, but nearly everything he touches turns to gold. That trend continues with Two Hands, by far the best instrumental piano album to cross this desk this year. Madsen's compositions come to vivid life on Two Hands, avoiding classifications such as classical, pop or new age by transcending them all. Two Hands is not an album you pick up for light dinner music; it's an album you buy to listen to. If you do, the music is its own reward. Two Hands is a Wildy's World Certified Desert Island Disc.

Learn more about Gunnar Madsen at http://www.gunnarmadsen.com/.  Two Hands is available on CD

from Amazon.  Downloads are also available from iTunes.
Posted by Wildy at 5:20 AM