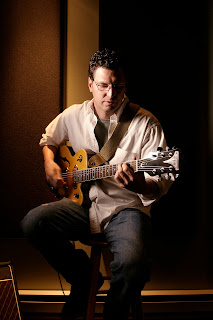 John McVey hasn't released an album in ten years, but he certainly has been busy. Working as a producer in his adopted home of Boulder, Colorado, the Princeton, New Jersey native has continued to play and write as well as volunteering his time and music to charities local, regional and national. On July 20, 2010, McVey will release his third album, Unpredictable, with a portion of the proceeds benefiting Kids Food Basket in Grand Rapids, Michigan.

Unpredictable opens with "A Little More Time" an easy-going country/rock song with elements of soul and gospel woven in the seams. The song has a solid melody, and McVey's vocal line is a highly enjoyable listen. "Leave A Little Mark" is all about making a difference in the world around you. It fits in with how McVey leads his life and is an honest reflection although it comes across as somewhat cliché. "Unpredictable" is all about the ways of love; a bit of popular wisdom in the form of musical rumination. McVey has a real way with melody, creating lines that are new but instantly recognizable; you'll find yourself humming along on the first listen.

McVey brings in the funk on "The Con Man's Easy Chair", mixing it up with mellow horns. It's a great tune; a lot of fun and musically challenging. It's here that McVey begins to lose the listener's attention with a series of solid and sweet melodies attached to pedestrian arrangements. There's nothing here listeners are likely to outright dislike, but at the end of the day you're not likely to remember much of the second half of the album. "Rodeo Around The World" finds McVey planting his feet again in a uniquely country love song with pop underpinnings before closing with "Lay Your Burden Down". This last is delivered in a Take 6-style acapella arrangement with a pop vocal line. It's a decent bow and a definite change of pace, but not the definitive closer you might hope for.

Unpredictable will draw you in with the pretty melodies that John McVey constructs, but outside of the first few songs there's not a lot above and beyond the musical aesthetic he imparts with his voice. Unpredictable is pretty and unpretentious, perhaps too much so of the latter.

Learn more about John McVey at http://www.johnmcvey.com/.  Unpredictable drops on July 20, 2010.  Keep checking McVey's website for availability.
Posted by Wildy at 5:00 AM