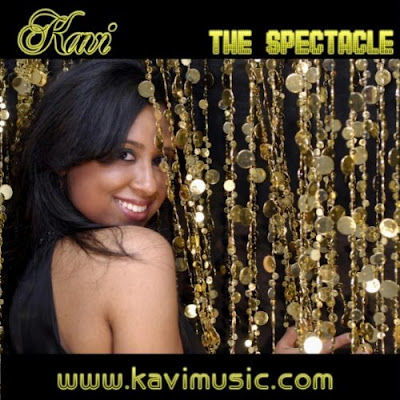 Kavi is an Australian-born; Los Angeles based singer-songwriter. Kavi, which means poet in the Tamil language of India, sings in a heavily R&B influenced pop style, and writes mild pop songs aimed at top-40 radio. This might not be what you would expect from someone who cut her musical teeth on Sangeetham (Sri Lankan Opera), but pop music wasn’t far behind. Kavi’s EP, The Spectacle shows off her love of pop music with six self-penned tunes. Kavi continues to perform and collaborate with other songwriters on the Hollywood scene.

The Spectacle opens with "Kiss Me", a generic pop ballad with a decent melody. The vocal line here is sufficient, although Kavi does seem to struggle at times with pitch on the vocal trills, sliding around notes rather than hitting them cleanly. "I Lie To Me" attempts to capture the flavor of R&B in a pop setting; once again it's a sufficient performance but there's no real creative spark apparent here. In many ways the song sounds like a composite of Top-40 radio/R&B from the early oughts. Kavi raises her game a notch with "U Got Me", a well-constructed pop ballad with mild commercial feel. The vocal performance here is better, but one gets the sense that Kavi is trying to fit a sound rather than singing in her natural voice.

"Wish" is a decent effort, but once again Kavi struggles with pitch on the runs/trills. This detracts from what is, at base, a pleasant performance. "Tic Toc" is aimed more at the dance crowd; a well-constructed dance tune that could be easily sliced and diced for the club circuit. From a commercial perspective, "Tic Toc" is the most viable track on the EP, and shows off Kavi's best vocal performance on the album as the nature of the song keeps her away from the fancy vocal tricks that seem to cause her the most trouble. The Spectacle closes with an untitled bonus track, delivered in an acoustic arrangement. Once again, Kavi eschews the vocal trickery and sings in what I suspect is more of her natural voice.

Kavi's The Spectacle is a passionate attempt to rise above vocal limitations. Kavi obviously has a penchant for a Pop/R&B sound that requires significant breath control and vocal training, but her best performances on The Spectacle come when sings in a straight-forward pop style that minimizes the trills and runs that dominate the R&B vocal style prevalent on Top-40 and Urban radio. One song here, "Tic Toc" has real commercial potential and would easily transfer to the dance club scene, but otherwise The Spectacle is more mundane than spectacular.

Rating: 2 Stars (Out of 5)
Learn more about Kavi at http://www.kavimusic.com/ or www.myspace.com/kavimusic. The Spectacle is available in multiple formats from Amazon as well as from iTunes.
Posted by Wildy at 4:55 AM