Meek And The Marksmen - According To Red [EP] 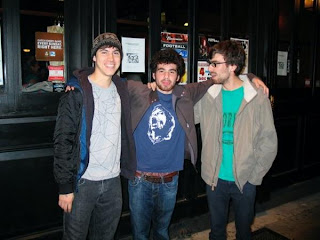 According To Red opens with "Juliet", a story-song about a girl who is unhappy with her life and runs away to the big city, only to find that she loves the boy she left behind. "Juliet" is an incredibly tuneful and catchy piece of folk/rock; a fantastic bit of songwriting. "According To Red" keeps the same folk/rock sheen but with a funk backbone; it's a highly entertaining song that may get a bit muddled in the story-telling but is nonetheless fun to listen to. "Jesus" keeps a blues/funk base underneath that drives the song in spite of a murky story line. Things pick up a bit with "Wading River"; a mellow-yet-rhythmic tune about someone who spent time institutionalized who is suddenly turned out to the streets. The song is a study in the struggle for identity and meaning and is very well written. According To Red closes with "Tough Broad", a catchy little love song that qualifies as non-traditional. The song is a lot of fun and is delivered in a low-key fashion that's almost humorous.

Meek And The Marksmen display a proclivity for Low-Fi folk/rock on According To Red [EP], an entertaining and accessible recording that should appeal to current acoustic rock fans as well as those of earlier generations looking for new bands with sounds rooted in yesteryear. The Garage/DIY sensibility of According To Red may not sit well with some, but Meek And The Marksmen write, play and sing quite well together. Make sure to check them out.

Learn more about Meek And The Marksmen at www.myspace.com/meekandthemarksmen.  According To Red is available for download via iTunes, or directly through the band's MySpace page.
Posted by Wildy at 5:10 AM

Labels: Meek And The Marksmen