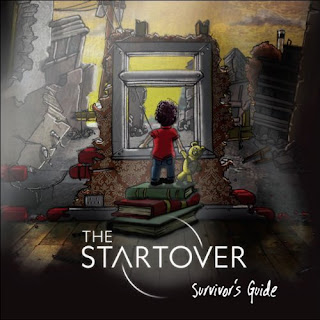 Survivor's Guide opens with "Worst Case Scenario", a high energy modern rock ride about the emotional effects of being misled. "The Last Hurrah" has a neat sound, with a big chorus, solid vocal harmonies and a guitar riff. "Tactics (We'll Sleep When You're Dead)" sticks to a similar vein; a highly commercial modern rock sound that sounds a lot like too many other bands to be truly distinctive. "Tactics" has a solid chorus, but the song just doesn't go anywhere. "Breathing's Overrated", however, breaks out of the pre-molded shell The Startover has been playing in thus far. The same elements are here, but there's a distinctive melodic pop sensibility that The Startover captures this time around. The harmonies and hook in the chorus are addictive. "13 Ways To Be Better Than You" keeps the melodic pop sensibility but slips a bit back into the pre-molded form The Startover began with. Survivor's Guide bows with "If You Build It...", which alternates between a rough-and-tumble guitar sound and highly polished rock n roll. While not the best pure songwriting on the disc, it does show a greater versatility than you might expect from the rest of the EP; a sign that however much The Startover might want to play the commercial radio game, they also know very much how to rock.

Survivor's Guide is a solid first effort from The Startover. The focus here seems to be commercial success, which is fine, but there's a more sophisticated side to the band that's also a bit heavier and creative than you'd guess from the first half of the EP. In short, Survivor's Guide starts out as more of the same commercial heavy rock sound, but turns into something quite intriguing. It'll be curious to see what The Startover comes back with next.

Learn more about The Startover at www.myspace.com/thisisthestartover.  Survivor's Guide

is available from Amazon.com and iTunes
Posted by Wildy at 5:00 AM