Dave Duncan - I'm Not Made Of Stone 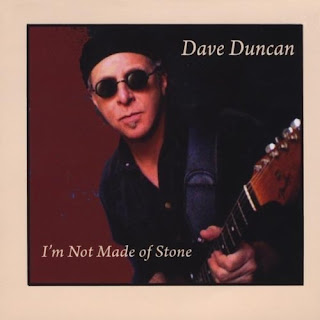 Dave Duncan has thirty-five years in the music business under his belt, having played with folks such as Gatemouth Brown, JJ Cale, Charlie Daniels, Delbert McClinton and The Nighthawks. With two Gold Records to his credit and a Blues Song Of The Year nomination (2008), Duncan has also received his share of recognition. 2010 finds Duncan returning with a new album of 12 original songs entitled I’m Not Made Of Stone. It’s a raucous trip through the blues featuring sharp songwriting, excellent musicianship and Duncan’s wicked sense of humor.

I'm Not Made Of Stone opens with the catchy blues/rock of "I Ain't Down With That", showing off Duncan's rough-hewn voice in great light. Duncan shows a predilection of early R&B and B.B. King style guitar licks that never really fades throughout the album. "Heartache Who's Time Has Come" is a catchy R&B number that will rattle around in your brain. Duncan goes for inclusion on "The Blues Comes In All Colors", a slower tempo tune about the universality of the blues. Duncan references the classic blues scenes and several influential performers past & present in the process.

Duncan shows a softer side on "I'm Not Made Of Stone", dropping the blues bravado from his voice for a more Joe Cocker-style vocal. Duncan's voice is not the most aesthetically pleasing here, but what he may lack in tone he makes up for with a highly emotive and moving performance. The highlight of the album is the duet "1-800 Use To Be", a highly danceable kiss-off song that rocks around in true 8-to-the-bar fashion. Vocalist Jonell Mosser shows off amazing pipes opposite Duncan on this tune. Duncan is solid the rest of the way, using up much of his better material on the first half of the album. He does save a couple of gems for late in the game, however. "Wild Hair On My Redneck" is a highly entertaining turn, and "Y Pay The X" is a classic protest song against the evils of alimony. It's a cute closing number that shows off both Duncan's musical chops and his wit.

Dave Duncan's I'm Not Made Of Stone is a solid effort that mixes Blues, R&B, rock and roots music in a concoction that's quite enjoyable to listen to. The songwriting ranges from par to superb. Nothing here really drags, but the second half of the album isn't up to the level of the first. I'm Not Made Of Stone does show a heavy B.B. King influence, and fans of King will dig the vibe Duncan has going on.

Learn more about Dave Duncan at http://www.daveduncanmusic.com/ or www.myspace.com/daveduncanblues.  I'm Not Made Of Stone is available as both a CD