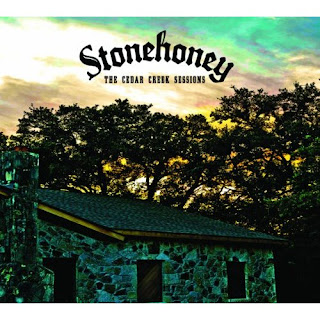 Austin, Texas bills itself as the live-music capital of the world. The more we see of artists such as Stonehoney, the more we believe the hype. Stonehoney is the coming together of four singer/songwriters (Shawn Davis, Phil Hurley, David Phenicie and Nick Randolph) who met at a songwriters round-table and found instant chemistry. Fans who attend their live shows feel it to, as Stonehoney has become one of the local favorites in Austin. In recording their debut album, The Cedar Creek Sessions, Stonehoney sought to capture that live vibe by recording the entire album live in-studio with the help of guests such as Earl "Poole" Ball (Johnny Cash) and Ken Coomer (Wilco). The result is an aural experience you have to hear to believe.

The Cedar Creek Sessions opens with "Two Years Down", an Eagles-style country rocker with distinctive pop sensibility and an unforgettable melody. It’s a song of longing written from afar; a great start to the album. "Headlight On A Midnight Train" is the absolutely brilliant second track; a song that should not be neglected from consideration as a single. This is one of those songs better heard than described as Stonehoney builds a sound here that approaches perfection. "Lucky One" is an upbeat love song with serious potential as single that sounds a bit like a Blue Rodeo outtake but with a soulful side. Stonehoney displays their best trait on "I Don't Wanna Go"; an ability to write commercial songs without trying to sound commercial. "I Don't Wanna Go Home" is a song about the desolation of being newly on your own. There's a definite Eagles feel here, but Stonehoney keeps the sound their own.

"White Knuckle Wind" finds listeners venturing into the honky tonk with Stonehoney in a turn you'll find it difficult not to dance to. "Good As Gone" takes a more serious tone, treating listeners to a story about the consequences of unintended events and reminding us that sometimes a mistake can change our lives. "Feels Like Home" shows off an organic sound that's a bit closer to traditional country that shows off Stonehoney's collective compositional skills. "Dance With You" is the mandatory schmaltzy love song; a surprisingly good pop-oriented country ballad with vocals that sound more than a bit like Bob Seger. "There Is A Light" is a pleasant little tune with an uplifting message and a melody you'll find yourself humming along to the first time you hear it. Stonehoney closes with "Feel Like I'm Gonna Die", a raucous honky tonk tune that seems like the perfect way to say goodnight.

Listening to The Cedar Creek Sessions is a revelatory experience. Not only do you get a clear picture of the songwriting and musical talent of the band, but you also get a sound that seems to closely approximate the band's live sound. If the experience of hearing The Cedar Creek Sessions doesn't end up with you searching the internet to see how close Stonehoney's next tour comes to your town then you weren't listening carefully. While the sound is a bit different, the last country band I heard come along that had their stuff so thoroughly together was Diamond Rio. Stonehoney is a creative force that will hopefully be making great albums for a long time to come. The Cedar Creek Sessions should be the first of many.

Learn more about Stonehoney at http://www.stonehoney.com/ or www.myspace.com/stonehoney.  The Cedar Creek Sessions is available from Amazon.com as a CD

.  The album is also available via iTunes.
Posted by Wildy at 5:20 AM

The chap is completely right, and there's no skepticism.