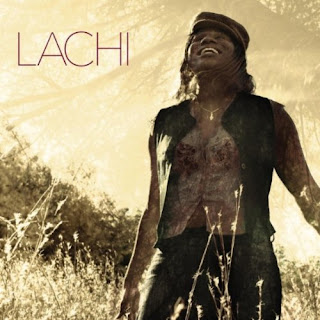 New York City singer/songwriter Lachi has been making waves locally since 2007. On July 27, 2010, Lachi releases her first album on Fanatic Records/EMI. The album, simply entitled Lachi, is set to introduce the world to a legally blind singer supported by blind musicians. In spite of any challenges life has placed in front of her, Lachi continues to strive to create and perform with the best in the craft.

Lachi opens with "We Can Fly", showing off a voice that makes up for in compelling nature what it lacks in prettiness. Think Alanis Morisette's anachronistic style and you'll have an idea. It's a song of hope and promise about a relationship that's cut with an edge of reality. "Slow Down" is a bit awkward lyrically, but has a beautifully simple piano arrangement accented with jazz rhythms in the percussion that's a pleasure to listen to. On "Ugly Beautiful" Lachi laments people's need to change themselves for the acceptance of others; taking to task in veiled language both society's expectations and the aspects of human weakness that drive us to meet them.

"Emo Children" is rumination on the state of teenage angst as it exists today; navel gaze material for the disaffected and numb. "Funny Girl" goes for the classic juxtaposition of the stand-up comedian: Funny, life-of-the-party on the outside; sad child on the inside. It's a decent effort, but it's been done so many times in various art-forms and is presented here in too straight-forward fashion to really stand out. Lachi here falls into something of a musical lull, pulling out on the penultimate and best song on the album, "Wear Me Out". "Wear Me Out" features a strong chorus that grabs the listener and is Lachi's most clear and concise writing of the cycle. Lachi floats back to earth with "You Never Do", a decent effort but a definite letdown after "Wear Me Out".

Lachi is going to make it or not on the strength of her songwriting. Lachi's sound is off-beat enough to catch your ear, but anachronistic enough to lose you without something else in the mix. Lachi definitely shows moments of songwriting prowess on her self-titled debut with songs such as "Slow Down" and "Wear Me Out", but in general her lyrical style is a bit rough and occasionally awkward. Lachi has a lot to say, she just hasn't figured out how best to marry her thoughts to her music yet. Lachi represents the potential of an artist, with flashes dotting the album like dandelions on a lawn. You know they'll spread, you just don't know where or how fast.

Learn more about Lachi at http://www.ulachi.com/ or www.myspace.com/lachimusic.  Lachi drops July 27, 2010.  You can pre-order the album on CD

or as a Lachi