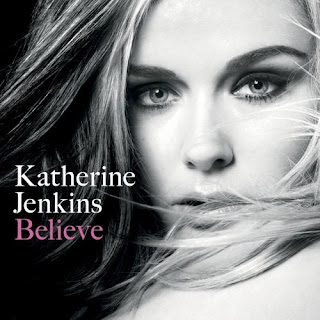 Welsh mezzo-soprano Katherine Jenkins is bigger than Celine Dion and the Spice Girls. At least she's outsold both mega-acts in the UK, becoming one of the few recording artists in UK history to score two #1 albums in the same year. Jenkins' seventh album, Believe, dropped in the UK in the Fall of 2009. Produced by 15-time GRAMMY Award winner David Foster, Believe calls on both Jenkins' mastery of classical music as well as her love of the pop form. Long unknown to US audiences, Jenkins' contract with Warner Bros. Records opened the door to the New World, and Believe was released in North American in May of 2010.

Believe opens with "Till There Was You", Meredith Wilson's classic song from The Music Man. Jenkins' RCSM training shows in her diction with consonants so crisp they could be used to chop wood. This may be a distraction for those used to the slurred or often absent diction of your typical pop star, but Jenkins' mellifluous voice will quickly convince you all is as it should be. The bravest and best choice on Believe is Jenkins' startling cover of "Bring Me To Life" (Evanescence). Foster's arrangement cuts out the drums and brings natural percussion out of the strings in a striking contract to Jenkins' vocal line, all while maintaining the edge of the original. It's a true "Wow" moment. The cover of Sarah McLachlan's "Angel" is a bit more formal than the original but maintains the sweet spirit McLachlan's version embodies.

Andrea Bocelli sits in for a duet on "I Believe", remarkable for the chemistry and blend of vocal sounds he and Jenkins achieve together. Jenkins sounds like a true leading lady on Andrew Lloyd Webber's "Love Never Dies", caressing Lloyd-Webbers trademark cadences like she was born to sing them. "Fear Of Falling" plays like a classic Broadway ballad; it's a great love song on its own but Jenkins breathes life into it and makes it walk. Having played well on the pop side of the wall, Jenkins returns to her roots with "Parla Piu Piano (Love Theme From The Godfather)", intertwining the beauty and tragedy of the song in a vocal performance that will send chills down your spine. Perhaps the most amazing discovery for someone previously unfamiliar with Jenkins is her ability to belt with Wagnerian intensity only to suddenly plummet to sweet lyric sounds that are so diametrically opposed as to seem impossible.

Andre Rieu sits in for Aneora Non Sai, matching his violin to Jenkins' voice in a dance you'll want to hear and hear again. Jenkins has a true diva moment covering Edith Piaf's "La Vie En Rose", recreating the Victrola sound for the opening of the song. It's the sort of performance that helps you understand Jenkins' mastery of her instrument, both technically and as an entertainer. Make sure to catch Chris Botti's appearance on "La Califfa", which leads into Jenkins' powerful interpretation of Queen's "Who Wants To Live Forever". Jenkins closes with Adagio, returning to her roots with a simple offering that overcomes aesthetics and reaches for pure beauty.

Katherine Jenkins has serious chops as a classical singer, but her coming of age in Britain's popular culture may cause some serious classical music fans in the US to take her a little less seriously. Don't. Katherine Jenkins masters both classical and pop styles in a fashion that calls to mind artists such as Josh Groban and Kristin Chenoweth. Believe is destined to make a path for Jenkins to concert halls across North America. It's unthinkable that she might be just a British phenomenon. Voices like hers do not come along often.

Learn more about Katherine Jenkins at http://www.katherinejenkins.co.uk/ or www.myspace.com/katherinejenkins.  Believe is available from Amazon or iTunes.
Posted by Wildy at 5:10 AM