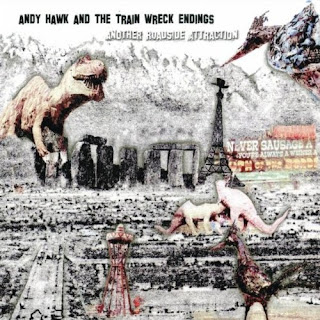 Andy Hawks is back with an album of travel songs in Another Roadside Attraction. Building on his rootsy Americana sound, Hawk blends bluegrass, rock, folk, country and Motown into the mix in a highly eclectic but somehow coherent cycle of twelve songs.

Andy Hawk & The Train Wreck Endings return with their latest effort, Another Roadside Attraction. Burnished in his traditional blend of roots-inspired folk rock, Hawk takes listeners on a tour of twelve story-songs that range from personal experience to ruminations on the life and times of Ernest Hemmingway. Hawk's unvarnished voice and raw songwriting contrasts nicely against the tight professional musicianship of his band, serving as an active subject against masterful musical landscapes.

Opening with "Another Roadside Attraction", Hawk gets things in gear with a solid R&B/folk arrangement and a catchy melody that will have you grooving in your seat. Hawk is full of personality, and his gritty voice in this setting inspires thoughts of a post-modern blues movement yet to be born. Moving quickly to the other end of the musical spectrum, Hawk digs into the cheesy love song "You Could Be My Lois Lane". Predictable but cute, the song is entertaining on first blush but quickly pales. Dashed expectations are on tap with "New Orleans", where a city of dreams turns quickly to a nightmare for one sojourner.

"Lipstick & Dynamite" is an entertaining number that pays tribute to female professional wrestlers; an entertaining country romp that's irresistible. Hawk entertains with some impressive Spanish guitar work on "Welcome To Havana, Mr. Hemmingway", but the song essentially fizzles otherwise. You'll catch some impressive piano work on "Everyday It Changes", an affable early-rock number that you can't help but dance to. Hawk closes with the one-two punch of "It's What You Take Away" and the Jimmy Buffet-style "Ghosts Of Summer Sun", two upbeat numbers that will help you forget the sometimes somnolent pacing of the album.

Andy Hawk & The Train Wreck Endings never fail to produce some highly listenable material, and Another Roadside Attraction is no exception. It should be noted however that this album is very much a hot-and-cold affair. The songs either work very well or fail badly, with Hawk excelling (generally) on the more upbeat material and getting lost on the slower, ballad-style songs. The musicianship is first-class from start to finish, and Hawk is as enigmatic and personable as ever on Roadside Attraction. The album itself would make a first class EP. As presented, it's a solid overall offering with some real holes.

Learn more about Andy Hawk at http://www.andyhawk.com/.  Another Roadside Attraction is available as a CD

from Amazon.com.  The album can also be found on iTunes.
Posted by Wildy at 5:00 AM