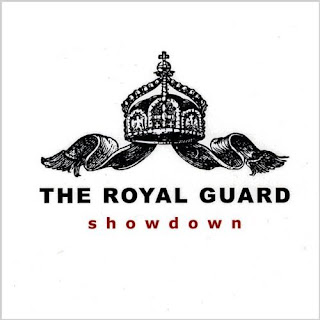 Fans of Fall Out Boy and 30 Seconds To Mars take heed; there's a new band on the block playing on the same playground. The Royal Guard (Todd Davidson - vocals/guitar; Andy Ascolese - guitar/vocals and Fred Scragg - drums) released their debut CD, Showdown, late in 2009, documenting the sound the band had developed over a couple of years of steady gigging. Blending pop, punk and rock, The Royal Guard creates in a consistently inconsistent realm where sonic trends break upon one another.

Showdown opens with "All Out War", a pop/punk anthem about a war over the minds and souls of the young. The song could have theological implications or may just be a post-modern song of self-actualization. "Happy" is a solid active-rock love song. Built on a strong hook in a radio-ready chorus, The Royal Guard keeps the alt-punk energy intact in a love song without getting gooey. "Yesterday" shows off The Royal Guard's retro proclivities, working in a harmonic guitar solo reminiscent of Brian May.

As if so much patent creativity could tire a band, The Royal Guard fall into a lull of formulaic pop/punk spiked with the occasional impressive guitar work. The tide turns with "Satellite", a dynamic pop/rock tune with a memorable chorus and a driving guitar riff. You could picture "Satellite" being the song that takes off for The Royal Guard. "Beginning Of The End" has the pop sensibility to be a mild radio presence, but seems more likely for the licensing realm.

Showdown is ultimately a 50/50 affair, with about half the album proving to have a creative spark worth catching onto, with the rest sounding a bit too much like too many other things already on the radio. The Royal Guard's debut is a solid commercial and musical effort, but listeners may sense greater potential in what might turn out to be a sleeping giant of a band. While Showdown is worth checking out, The Royal Guard may be a good band to follow longer term. Once they shake off their need to be commercial they might start creative some truly amazing music.

Learn more about The Royal Guard at http://www.theroyalguardband.com/ or www.myspace.com/theroyalguard.  Showdown is available from Amazon.com as either a CD

.  The album is also available via iTunes.
Posted by Wildy at 5:10 AM

Labels: 30 Seconds To Mars, Fall Out Boy, The Royal Guard

Well, I do not really believe this will have success.