Trevor Alguire - Now Before Us 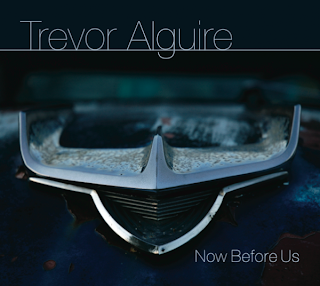 Trevor Alguire has earned a strong reputation as a singer/songwriter, first as the front man for Mercury Pickup and now as a solo artist. A staple on the Canadian roots/country scene, Alguire spent some time on the Roots Radio and AMA charts with 2008's Thirty Year Run. Alguire returns on August 31, 2010 with his third solo album, Now Before Us.

Alguire's sound returns to a time when music was simple and lyrics were the centerpiece of songwriting. Blending 1950's, 1960's and 1970's country sounds in simply arranged story-songs, Alguire is all storyteller on Now Before Us. Opening with "Are You Ready", Alguire offers an outstanding country tune that comments on life and death and the need to be prepared for whatever life sends our way. It's a simple allegory for a deep philosophical understanding of the meaning of life. "Hold On" is a love song for those long involved about keeping things together and growing. It's a decent tune with a catchy melody that falls into a repetitive rut but has a solid enough hook to survive. Alguire gets old-school country with "Beautiful Night" and brings a bit of bluegrass on the entertaining story song "Pen A Man Down"

Throughout the rest of Now Before Us Trevor Alguire continues to spin stories of varying complexity, but the presentation of the album is going to lose him a lot of listeners. While Alguire writes well and the musicianship exceeds solid in all measures, the stripped down sound becomes monotonous and seems to lack real vibrancy. Being familiar with Alguire's reputation as a performer it's safe to assume this is an anomaly perhaps chalked up to production, but the lack of dynamic variation makes the second half of Now Before Us a tough listen. It's unfortunate, because the songs in general are well written; there's just no energy to sustain the listener.

Learn more about Trevor Alguire at http://www.trevoralguire.com/ or www.myspace.com/trevoralguire.  Now Before Us drops on August 31, 2010.  Keep checking Alguire's website for availability.
Posted by Wildy at 5:00 AM