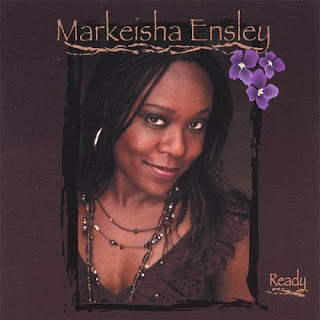 Markeisha Ensley is a New York City based singer/songwriter and actress. A musician from the age of seven, Ensley has the sort of voice that people will stop what they are doing and walk over to find out who is singing. Ensley has acting credits that include Caroline, Or Change and Chess - In Concert, and was nominated for an AUDELCO award in 2001 for her work in Jamaica. Ensley's debut album, Ready, shows a distinctive talent for songwriting and a voice you can't walk away from, but also shows the bumps and bruises of a songwriter still developing her craft.

Ready opens with "The Strangest Thing", a funky and soulful tune that's mildly catchy. The song is made by Ensley's voice, which turns a slightly better than ordinary tune into something magical. "Joy Comes In The Morning" is based on a biblical passage of hope, reminding those would listen to endure the dark times because light is right around the corner. It's an inspiring message and vocal. "Spend My Life" is a powerful love song in which Ensley's voice takes on shades of a young Whitney Houston. Ensley can belt out a tune with aplomb and shows off her full dynamic range here. "Ready" is a song about starting over and is very well written. Ensley's voice is a bit too big here; belting her way through a song of vulnerability and quiet strength. She sounds great, but the sound just doesn't work with the song.

"Can't Stop This Feeling" is soul R&B and has a more stripped down sound that shows off the nuances in her voice. The song has a classic feel and shows another side of Ensley as an artist. Now choosing songs for an EP or album is always a difficult process, particularly when reviewers second guess your choices after the fact. That being said, it seems like perhaps Ensley should have called it quits with a five song EP. It's not that the rest of the album is bad, but it's just not up to the level of the first five songs. "Just One Step", "Must Be Love", "Loving You" and "Take It All" have somewhat bland feel to them, as if the intensity of the first half of the album just wasn't there when these songs were recorded. Ironically enough, "Loving You" was one of the songs that placed in the Billboard World Songwriting Awards.

Markeisha Ensley has a strong future as a performer, and shows clearly on Ready that she can write and deliver affecting and powerful songs. It's curious that Ensley's most recent album is from 2006, as I can imagine people paying to hear her sing almost anything. For now, Ready will have to do. While the album has its ups and downs, Ready gives clear indications of the sort of songwriter and performer Markeisha Ensley is. The future looks bright.

Learn more about Markeisha Ensley at http://www.markeisha.com/ or www.myspace.com/markeishaensley.  Ready is available as a CD

.  The album is also available from iTunes.
Posted by Wildy at 5:00 AM