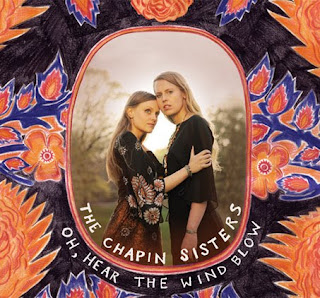 Imagine, if you will, taking the distinctive harmonies of Wilson Phillips and infusing it with a dark melancholy and you'll have an idea of the sound of The Chapin Sisters. Oh, Hear The Wind Blow opens with "Bird Song", a song of longing and sorrow that pines for and wonders after a lover who never came home. The harmonies here are those of two dark angels, blending sorrow and beauty in equal measure. "Left All Alone" has a dark premise, but plays with the bouncy feel of late-1950's or early-1960's pop hit. The harmonies here are downright gorgeous and the songwriting is not too shabby either. "Let Me Go" continues to play in the dark/light continuum that the Chapin Sisters seem to favor, singing about a relationship that's falling apart in dark tones but adding in peppy vocal artifices that seem to belie the song's feel.

"Palm Tree" could have been a pop hit four or five decades ago, mixing the sorrowful feel of a country heartbreaker with the feel of a classic early-rock hit. The Chapin Sisters continue to dazzle vocally, both on lead and harmony vocals, and "Palm Tree" might be the best example of this on the album. Oh, Hear The Wind Blow closes with "Digging A Hole", a dark tune about the mixed necessity and futility of daily life. The song has a primal feel, driven by an American aboriginal-style rhythm and chant-style chorus that emulates Native American singing. It's an intriguing piece and a brave and successful closer for the EP.

The Chapin Sisters hit a quiet homerun with Oh, Hear The Wind Blow. Quiet because this EP is too good to ignore but too far off the beaten path to gain The Chapin Sisters the sort of attention they deserve for it. The vocals alone are worth a listen, but the songwriting here is top-notch as well. Make sure you spend some time getting to know the Chapin sisters.

Labels: The Be Good Tanyas, The Chapin Sisters, Wilson Phillips