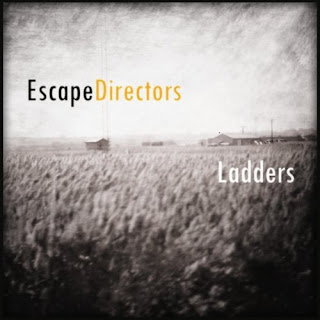 Wayne, New Jersey quartet Escape Directors walk the fine line between the Indie feel of Death Cab For Cutie and the more polished sound of bands such as The Killers, The Fray and even Radiohead. Taking a less in your face approach than most pop/rock outfits, Escape Directors will sneak up on you with songs that insinuate themselves into your mind and then won’t let you go. This tendency is very much in evidence on Escape Director’s debut album, Ladders.

Ladders opens with "Car Crash" a well-written song of regret that's delivered in a low-key fashion but with a lot of power. The song is incredibly tuneful, and Escape Directors come across sounding like a slightly more muscular version of Toad The Wet Sprocket. "Heart Defeats The Home" is an unglamorous look at adultery. Escape Directors craft strings around the base arrangement to build tension and bring resolution, while Steve Carter's vocals and the band's harmonies tell a story of love, betrayal and regret. "Fall Together" is a solid pop/rock effort with a melody that practically sings itself to you; the sort of song you'll be inclined to hit repeat on many times over.

Bravado rules the day on "When You're Gone", where the narrator tries to convince the one who cut him loose that he'll be alright. As the song progresses you realize that he's actually speaking years after the event when she has very much moved on, and it's clear he never has. "Chicago" is a song of unintended consequences and the beginning of a life on the run. It’s a fun listen with a dark underbelly that will draw you in. The centerpiece of the album, however, may just be "Mrs. Davenport", an incredibly catchy kiss-off song. Written in a compact and subdued arrangement, "Mrs. Davenport" is graced with a melody that screams for your attention. It's a brilliant bit of songwriting with a quiet pop flavor you can't ignore. "Margaret Marion" is a love ballad to someone who has passed on sonically inspired by Radiohead. The theme continues into "Take Me Back Home", where the narrator looks forward to a time when he will be reunited with his love in the afterlife. It's a beautiful sentiment wrapped up in a gorgeous arrangement consisting of acoustic guitar, piano and cello.

Escape Directors might not grab your attention. They're not a flashy bunch, but the songwriting is quietly amazing. Crafting melodies in the irresistible tradition of British rock n roll, Escape Directors have created a first class pop/rock album in Ladders. The comparisons to Toad The Wet Sprocket and Radiohead are spot-on, as Escape Directors build song after song out of distinctive melodies and energetic but understated arrangements that get under your skin and whisper quietly into your mind. Don't miss this one.

from Amazon.com.  The album is also available from iTunes.
Posted by Wildy at 5:10 AM