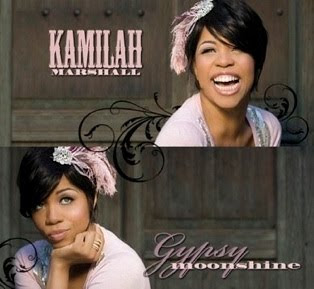 Chances are you’ve heard Kamilah (Ka-Mee-La) Marshall’s voice before and don’t even know it. Marshall has been one of the Staggering Harlettes (Bette Midler’s backup singers) since 2003, most recently performing as part of Midler’s The Showgirl Must Go On in Las Vegas. Marshall also spent some time as a member of the companies of Rent and Hairspray on Broadway (as Kamilah Martin). With comparisons to Roberta Flack, Marshall is sure to open some eyes with her debut solo album, Gypsy Moonshine.

Gypsy Moonshine opens with "Six Long Weeks" a lush and funky blues/pop tune about the agony of being apart from the one you love. Built around a great hook and serious pop sensibility, "Six Long Weeks" shows off Marshall's gorgeous, full voice in fine form. "Funkabilly" is a call to get back to our musical roots; in this case funk, rock, country, gospel and delta blues. Marshall opens up her voice and magical things happen in a highly danceable tune likely to get stuck in your head. "Hell In Your SUV" is a major kiss-off song for all the right reasons and a reminder not to mess up a good thing. Marshall's diatribe here is full of righteous anger, but it's intelligently written and skillfully delivered in a highly consumable fashion.

"It's Not You, It's Me" is a brilliant song of self-determination that starts off as an acoustic blues tune but turns to Memphis with a Vegas twist. Marshall's voice melts like butter in a top-notch arrangement that's stripped down but masterfully constructed. "The Way It Is" is a tortured, sorrowful take on Bruce Hornsby's song of inequality. Ensley's version looks up at the end in hope and works well in spite of the much darker tone than listeners might be used to. "Reach Out" is a heartfelt and soulful ballad in an acoustic arrangement; a gorgeous moment of vulnerability in song that is compelling at the very least. On "Independent Woman" Marshall explores the struggle between independence and the melding of personalities and needs that occurs in a relationship. "Independent Woman" adeptly touches on one of the classic struggles of human nature in a soulful bluesy song that shows her ability as a story-teller to be first class.

"Sis Shaw" is a song of consolation and remembrance, but also a call to move on and put past hurts behind; it's a touching and real moment of human emotion. "Jami" laments the plight of children whose fathers choose to walk away rather than be Dad and the cycle such decisions create in an entertaining song with Vegas flair. "Gypsy Moonshine" is a song about hero worship and how that aspect is affected when you get a chance to see behind the veil of stardom. It's a solid story song that seems like it might one of the most personal on the album. Gypsy Moonshine closes with "You Want Me", a song about the struggle between our need to be loved and accepted and our need to be ourselves. Written like a relationship song, it could also be a message to the music/entertainment industries that self-determination is more important than giving up yourself for stardom.

Kamilah Marshall impresses mightily with Gypsy Moonshine; blending multiple musical styles with a story-telling gift that is more advanced that you often find on a debut album. Marshall's voice is a thing of beauty, full of nuance and power, grit and beauty, and an ability to inhabit each song she sings with a wealth of inspiration and emotion. Gypsy Moonshine is certain to be on a few year-end lists.

Learn more about Kamilah Marshall at http://www.kamilahmarshall.com/ or www.myspace.com/marshallkamilah.  Gypsy Moonshine is due for a July, 2010 release.  Keep checking Marshall's website for availability.
Posted by Wildy at 5:54 AM