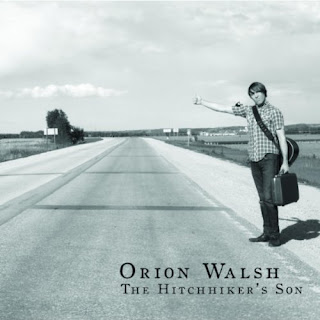 Orion Walsh returns with his third album, The Hitchhiker's Son in 2010. Drawing from a Dylan-esque well of road songs and counter-culture social commentary, Walsh offers up a collection of tunes hewn from the deep veins of American folk music. Walsh sings each song with a distinctive mid-west sensibility, but occasionally takes on the fire and story-telling braggadocio of the 1960's Greenwich Village scene.

The Hitchhiker's Son opens with "On Down The Road", a traveling song in an upbeat acoustic folk/rock arrangement. The song has one of those melodies that get stuck in your noggin, with rapid-fire lyrics and an affable arrangement. "Wastin' Time" is a fun little run about making the most (and least) of every moment. Fans of the Bonzo Dog madness will get the vibe here. Walsh bemoans money's power to conform human behavior in "Green Paper Black Lines", a song about being yourself in the face of monumental pressure to be like everyone else. "Lonesome Highway Blues" tackles the downfall of American culture from the perspective of someone who is both inside and outside the system, and fits in well with the history of socio-political folk music commentary.

"Leaving Again" is the snappiest tune on the album, ironically enough about the existential angst of finding your purpose ("We're all searching for something / even if we don't know what it is / when the world just keeps on spinnin' / round and round and around again"). The state of news and social media comes under Walsh's scrutiny in "Far From The Truth", a diatribe against the one-trusted institutions meant to keep government honest that now seem to do its bidding. Walsh closes with "Warrant For My Arrest", a prison-based story song drawn in the same vein as classic tunes by Johnny Cash. Walsh is good, but doesn't invest this song with the sort of charisma needed to carry it.

The Hitchhiker's Son works more often than it doesn't, with Walsh providing a charismatic, if low-key, presentation that is both fitting and charming. The songs on The Hitchhiker's Son are generally well written, and Walsh is 100% in the moment on each one. This album will appeal to fans of the 1960's folk/protest movement and like-minded fans of modern folk.

Learn more about Orion Walsh at www.myspace.com/orionwalsh or http://www.orionwalsh.com/.  The Hitchhiker's Son

is available from Amazon as a download.
Posted by Wildy at 5:00 AM

His folk music tendencies are overshadowed only by his sorrow. He feels each moment and is never too afraid to bear a piece of his soul to the listener.