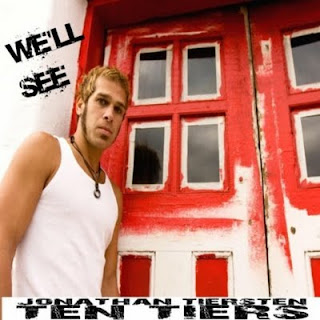 Jonathan Tiersten And Ten Tiers - We'll See
2011, Edward Records
Jonathan Tiersten seemed destined for an acting career as a child.  While he studied French Horn and guitar in his teens, Tiersten found his name in lights first in the role of Ricky Thomas in Robert Hilzik's film Sleepaway Camp.  Going on to study at New York City's Circle In The Square Theater, Tiersten went on to appear in the ABC After School Special Seasonal Differences, as well as the NBC soap Another World.  All the while, however, Tiersten was prowling the Greenwich Village music scene, gaining some notoriety as one half of the acoustic duo Magic Box.  In 1991, however, Tiersten left New York City for Colorado.  After a few side steps career-wise, Tiersten re-dedicated himself to music.  By the end of the first decade of the third millennium, Tiersten was busy.  He'd reprised his role as Thomas in Return To Sleepaway Camp, and also appeared in the Indie Flicks Redemption and The Perfect House.  Tiersten continues to make music as well.  His latest effort is a five-track EP entitled We'll See.
Tiersten opens with "In The Air", displaying a big rock sound built on minor key harmonies.  The chorus is fetching and dark, and virally catchy.  Tiersten blends pop and modern rock tendencies to create an off-beat but potentially commercial sound.  Tiersten is very solid vocally, sounding more than a little bit like Lawrence Gowan (Gowan, Styx).  "Vertigo" is a big rock anthem featuring a harmony-filled chorus you won't be able to get out of your head.  The song is about feeling lost and unable to find balance, and the inability to help others when you can't even help yourself.  "Theodore" is a piano-driven ballad about a latch key kid who is waiting for his mom to get home so he can sing to her.  The song is a bit obtuse in meaning and bland in sound, but grows on you with successive listens.  "Black Rain" is a simple folk/rocker with an appealing melody; a solid album track.  Tiersten closes with "Sancta Caecelia", starting with a classical-style guitar intro that morphs into a dark progressive rock number full of intrigue.  Tiersten's dark composition and exploration of spiritual themes is a dynamic juxtaposition, creating and diverting tension in an artistic and musical flurry you have to hear to believe.
So let the renaissance begin.  Jonathan Tiersten And Tiers play like rock n roll bards, uninhibited by a specific style or genre.  They write and play and tell stories that make you think, entertain you, and yes, occasionally leave you wondering what was that all about?  Either way the entertainment factor is high, and Tiersten is a surprising competent writer and vocalist.  We'll See is definitely worth spending some time on.
Rating: 4 Stars (Out of 5)
Learn more about Jonathan Tiersten and Ten Tiers at www.jonathantiersten.com or www.myspace.com/tentiers.  We'll See is available digitally from Amazon.com or iTunes.

Thank you guys so much! What a wonderfully written review. Jonathan