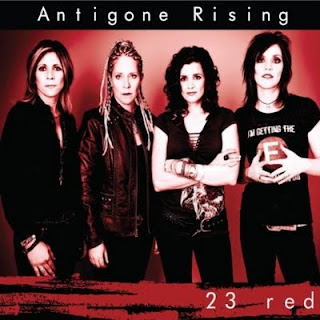 Antigone Rising – 23 Red
2011, Rising Shine Records
Changing your lead singer is always a touchy subject.  No matter who you choose, someone is bound to be unhappy.  Either the new vocalist sounds nothing like the original, or they sound too much alike, or some other real or imagined shortcoming that often fits more fully on the vanity of the fans than that of the band.  This is the challenge that faced Antigone Rising in 2008.  A hiatus proved unsatisfying, so the band set out to find a new singer.  What they have found in Nini Camps is the catalyst that might take them from being long-time Indie rock darlings to the upper reaches of the musical stratosphere.  The band’s recently released album, 23 Red, is their freshest and most sonically appealing work of their career.
23 Red opens with “No Remedy”, using an amplified acoustic pop/rock sound and an absolutely unforgettable chorus to get your feet moving.  This song has hit written all over it, and it’s not the only one on the album.  “Everywhere Is Home” is a mild, country-flavored love song.  This is the first single from the album, and promises to have Antigone Rising threatening ascent on the pop, country and Indie charts.  The ladies of Antigone Rising sing like angels when they put their voices together, a point exclaimed here in brilliant sound.  “Borrowed Time” is a sweet ballad, draped in poignant poetry that explores the need to do all we can with the time we have.    The harmonic convergence continues on “One Foot In”, a pure Americana blend of rock and country that is aurally appealing and fun.
“Gracefully” and “Who Knows What Tomorrow May Bring” show off Antigone Rising’s penchant for great melodies, first as an emotionally full  and layered ballad, then as a country, bordering on honky-tonk romp.  In the course of two songs Antigone Rising moves from a blue fatalism to a red, grab life by the horns transition that is dizzying and fun.  The energy here is amazing.  “Pink Sunglasses” is a dreamer’s anthem about finding the place and time that enables you to feel like you can do anything.  In this case it’s a quirky accessory, but the song is well-written and honest in its intentions.
“Breaking Me” is sonically gorgeous, although the energy is a bit stagnant at times.  This one is more of an aesthetic rumination than an impassioned plea, but the dark undertone fills it with a quiet urgency that’s undeniable.  “You Say You Want To Leave” is a classic relationship nexus song; He wants to leave and she doesn’t want him to.  She’s going out of her way to let him know it’s okay if he goes, while telling quietly underneath it’s not.  23 Red bows with “Goodbye”, coming full circle with the country/Americana blend Antigone Rising started with.  “Goodbye” could almost be a second take on the theme of “You Say You Want To Leave”, but from a better place.  Either way, it’s a pretty tune that satisfies the aesthetic muse of the band while retaining an emotional intelligence that is refreshing.
23 Red is one of those albums that gets you right from the start.  From the sweet lead vocals of Nini Camps to the irrepressible pop hooks and gorgeous four-part harmonies, Antigone Rising wraps listeners up in a blanket of sound while engaging listens on intellectual and emotional levels not often found in today’s pop song writers.  23 Red is going to be on a lot of year-end favorite lists and a nomination or two would not be unwarranted.
Rating: 4.5 Stars (Out of 5)
Learn more about Antigone Rising at www.antigonerising.com or www.myspace.com/antigonerising.  23 Red is available from Amazon.com as CD or Download

.  The album is also available via iTunes.
Posted by Wildy at 1:05 AM

This is a great album and it is very hard to put into words the talent this band has. Love it.