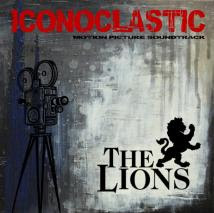 The Lions - Iconoclastic Motion Picture Soundtrack/Pub Songs and Sing-A-Longs
2011, The Lions
Calgary, Alberta rock trio The Lions charge into the second half of 2011 with the release of their fifth album in four years; Iconoclastic Motion Picture Soundtrack/Pub Songs And Sing-A-Longs (September 6, 2011).  The project encompasses concept albums, inspired periphery and socio-political commentary against the backdrop of fuzzy garage Americana, 1960's pop and jazz.  The Lions cross boundaries and barriers without looking, following their muse wherever it leads.  Sometimes this works brilliantly, such as on the Americana/garage rock blend of "No Reply", a catchy number you won't be able to get out of your head.  It is this blend of country and 1960's rock that seems to work best for The Lions.  You'll be jumping out of your seat for the Beatles-esque pop of "Anything Can Happen", and the dark, quietly driven edge of "Roman, The Ubiitsy Mesti" dares you to intrigue.  Much of the album is a steady flow of sound, rocking gently back and forth between singer/songwriter ballads and a solid, serial rock experience.  Other highlights include "Syd...Is A Serial Killer", "This Dog Can't Be Beat" and "Champions", whose chorus will stick with you for days.
The Lions take a break from their perfectionist tendencies on Iconoclastic..., allowing the songs to live and breathe for a short time before stepping into the studio.  Part structure, part improvisation and more than a little inspiration make the album their most vibrant work to date.  The Lions will get under your skin with Iconoclastic.
Rating: 3.5 Stars (Out of 5)
Learn more about The Lions at www.thelionsrockandroll.com or www.facebook.com/thelionsfb.  Iconoclastic drops on September 1, 2011.  Keep checking The Lions' website for further details.
Posted by Wildy at 5:00 AM