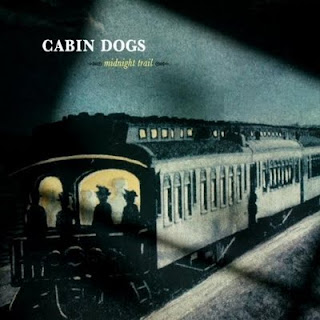 Cabin Dogs - Midnight Trail
2011, Cabin Dogs
Twin brothers Rich and Rob Kwait found their muse in Mountain Cabins from Vermont to Tennessee in the late 1990's, taking in the grit and stubborn beauty of Americana and Appalachian folk from its homeland.  The Philadelphia natives would return home, under the name The Kwait Brothers would begin to find a sound that incorporates these styles into a sub-stream blend of folk/rock that is as close to original as anything in the public marketplace.  Later changing their collective moniker to Cabin Dogs, the brothers met producer Aaron "Professor Louie" Hurwitz (The Band, Rick Danko), who helped shape their debut album, Electric Cabin.  The band grew with time, adding Ira Race (guitar); Stephan DiVincenzo (drums/vox); Jeff Levinsohn (drums/percussion) and Jeanine Reed (percussion/vox).  With growth came success, including appearances at the Newport Folk Festival, Apple Farm Festival and Full Circle Fair).  Cabin Dogs gear up for great things with impending release of Midnight Trail on August 30, 2011.
Midnight Trail is an intriguing listen from start to finish.  There aren't a lot of highs and lows here, but more of a steady ramble that runs the gamut from Folk/Americana to stylishly smooth rock and roll and even a touch of R&B.  "Blue Train" gets things started nicely, adding a modern twist to the folk/Americana blend that's Cabin Dogs' wheelhouse.  The vocal harmonies here are a thing of beauty, and add to the lonely tenor of the song.  Cabin Dogs build a solid groove on "Bloom", a low key rocker that's catchy and smooth and the same time.  "Out To The Country" is an old country waltz that box steps its way into your ears; a song that grows on you with successive listens.
"Twilight" shows a fine singer/songwriter style over a 1960's folk/rock style, as if Paul Simon were jamming with The Band or even Wilco.  Cabin Dogs even seem to take on Pink Floyd with the enigmatic "Dark Moon - Sunrise".  A funky bass line enlivens the minimalist arrangement, supporting a plaintive vocal that tugs at the ears.  Cabin Dogs gear up again with the Wilco-esque "Bringin' Me Down", a swaying mellow country/rocker that just sort of picks you up and takes you along for the ride.  Cabin Dogs close with the catchy, up-tempo folk/pop of "New Morning".  Everything here works, from the bright melody to the catchy arrangement to the intriguing vocal harmonies.  This is a great way to close an album that itself borders on greatness.
Cabin Dogs make a distinctive impression with Midnight Trail.  Gently rolling melodies and quietly distinctive arrangements make this an album that plays well the first time and gets better with age.  Some might argue that Cabin Dogs haven't 100% found themselves yet, but if true it only means they'll be scary good when they do.  The sound does bounce around a bit stylistically on Midnight Trail, but there's a flow here that belies the apparent gear shifts.  Midnight Trail establishes Cabin Dogs as a songwriting and performing force in an unmarked corner of the Americana super-genre.  It'll be interesting what sort of space they carve out for themselves over time.
Rating: 4 Stars (Out of 5)
Learn more about Cabin Dogs at www.cabindogs.com or www.myspace.com/cabindogs.  Midnight Trail was released digitally in March of 2011, but gets its CD release on August 30, 2011.  The digital release is currently available from Amazon.com or iTunes.

I`ve seen them at the Newport Folk Festival. WOW! They are amazing!!!