Morgen La Civita - From The Basement 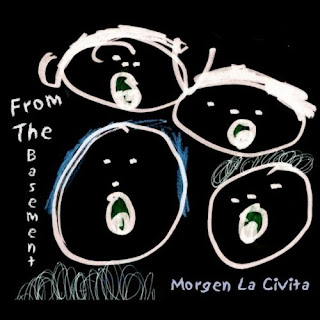 New Jersey's Morgen La Civita has been all over the airwaves for years as a voice-over artist. More recently she's taken to her home recording studio and begun a solo career as a singer-songwriter. With the help of GRAMMY Award winning Engineer (and husband) Jake R. Tanner, La Civita recorded and released her debut album, From The Basement in February of 2010. LaCivita mines the depths of human experience with an eye to opening the eyes of all who will listen to the plight of the forgotten, the lost and the unheard.

From The Basement opens with "Who I Am", a piano ballad lamenting a partner's inability to accept her for whom she really is. It begins as a moment of confusion over what to do but quickly grows into strength, telling him he can come along for the ride or she'll go her own way. The song highlights LaCivita's lush and earthy voice, a gorgeous instrument that cavorts with the piano in quiet, dulcet tones. "Joni Mitchell Memory" pays tribute to one of La Civita's bigger influences, sounding like a session cut from early in Mitchell's career in the process. Vocally La Civita will remind you at times of early Joan Osborne (in her pre-"One Of Us" days), and that comparison is very apt here.

L aCivita moves for more complicated matters with "Dark Water Lullaby", a deep and lovely ballad with fathomable meaning and a stark musical beauty that won't be denied. "What's Inside" is a morality lesson in looking beyond the surface to see what's inside. La Civita infuses middle eastern sounds here to create a sound that's both lovely and haunting. La Civita gets into some of the darker aspects of life on songs such as "Hush", "Pretty Marie" and "There Are Angels", a triumvirate at the heart of the album that take some stamina as a listener. The messages are in turn provocative and inspiring, but the musical landscape remains enough unchanged as to challenge the listener to keep up. This trend continues through much of the rest of the album although to lesser degrees. From The Basement closes with "Maybe", a song of cautious hope regarding a relationship that perhaps does not appear strong. The melody here is beautiful, among the finest on the album. La Civita is in her best voice here as well.

Morgen La Civita lives so far out of the box of popular music you'll wonder where it went. From The Basement is a leap of faith, both for La Civita and for the listener. If you can immerse yourself in her tales the reward is significant. La Civita writes in a solitary style that would benefit from a bit more collaboration, but her sense of melody is strong and her ability to craft a tale is well documented here. Where From The Basement falls short at times is a lack of dynamic variation. La Civita mixes and blends styles to her own liking in adept fashion, but the tone of her stories and the lack of distinct highs and lows make it harder to sink into the songs and stay there for the full song cycle. Nevertheless, it's apparent that Morgen La Civita is on to something here. She included a bonus track, "The Difference" from her upcoming album If You Like This Sort Of Thing. While one song doesn't tell about dynamic or pacing of an album, it's clear that in the six months since the release of From The Basement La Civita already shows the beginnings of progressive development as an artist. The future should be interesting.

Learn more about Morgen La Civita at http://www.morgenlacivita.com/ or www.facebook.com/morgen.lacivita.  Sales of From The Basement benefit the National Down Syndrome Society (http://www.ndss.org/).  From The Basement is a digital-only release.  Downloads are available from Amazon