Christian D And The Hangovers - Shake It...Or Leave It! 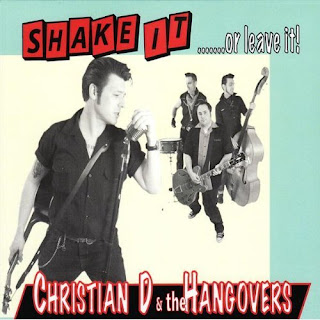 Shake It...Or Leave It! opens with the demented surf rock of "Vampire Rocker", capitalizing on the current vampire mania inspire by Twilight and fed by shows such as True Blood. Christian D has a post-punk Big Bopper persona that works well in the fast and loose musical arrangements presented here. "Life Gets In The Way" is pure early rock n roll, complete with backbeat and snappy melody line. On "Shimmy Shorts" Christian D is part Elvis, part Jerry Lee Lewis and part Phil Ramone, barreling his way through an entertaining and danceable bit of rock n roll. Christian D And The Hangovers get down to some pure rhythm and blues on "Good Woman", celebrating his woman's best traits even while deriding his own.

"Sleep My Life Away" is a catchy call to get up and go; a rough musical sketch that works in spite of the messy arrangement. On "Child Of The East Coast", Christian D digs into a country/rock sound that's appealing and seems to fit him well as a vocalist. "Baby Jane" is a raucous bit of early rock n roll likely to inspire fits of dancing, and features some of the cleanest guitar work on the album. "Hot Mess" seems like it should be destined to become the theme song of a movie of the same name. Once again, Christian D And The Hangovers manages to craft an incredibly catchy tune from a rough musical sketch that's highly appealing. "Hillbilly Heroin" is dark and catchy, but can't hold a candle to "Cornfed Dames", a tongue-in-cheek tribute to the talents of the fairer sex. Mack Black sits in with Christian D And The Hangovers on the closing number, "Dime A Dozen", a highly entertaining tune that will certainly not be the lead-in for the next NOW conference.

Christian D And The Hangovers aren't into pithy nuance; Shake It...Or Leave It! has the bad-boy feel of early rock n roll updated for today without pushing the envelope too seriously. Rock musical arrangements are the order of the day in support of entertaining, hip-shaking songs that are likely to cross generational boundaries in appeal. This isn't the refined sound of The Stray Cats, but a slightly rougher musical feel that's likely closer to the rough demos you might have heard out of 1960's mainstays such as The Beatles, Chuck Berry or even Dick Dale. If that sort of music is in your wheelhouse, then you're bound to appreciate Christian D And The Hangovers.

Learn more about Christian D And The Hangovers at http://www.christiand.ca/ or www.myspace.com/christiandesmond.  Shake It...Or Leave It! is available as a digital-only album through Amazon.com

Just gotta clarify one thing- "Cornfed Dames" is a great song originally written and performed by the Cramps, so we can't take credit for that one!